IKEA's research lab Space10 has traded in the "chaotic" open-plan design of its head office in Copenhagen for a more flexible workspace divided with mobile partitions, by local studio Spacon & X.

Located in Copenhagen's meatpacking district, the former fish factory became Space10's three-storey office building three years ago, when the company stripped down its interiors to form an open-plan layout.

However after soon finding that the open-plan didn't suit its workers, Space10 enlisted the help of Danish design studio Spacon & X to create a "new typology" of office design.

The design needed to forefront wellbeing and productivity, as well as accommodating its growing workforce.

"It was chaotic," said Space10's program lead Kevin Curran about the open format. "Especially when the office space came to house three times its intended capacity. Moving away from open plan was the most important starting point."

The designers divided up the first floor – formerly an open-plan office space – into a staff kitchen and an office area made up of several semi-open "cubes" that act as on-demand workspaces and meeting rooms.

White tiles and polished concrete floors reflect the minimal aesthetic that IKEA is known for, and are animated by brightly coloured panels dotted around the room. 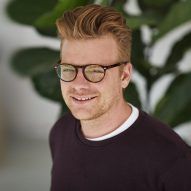 As a protected building, there were regulations that restricted what they could do to the space. Rather than changing anything structurally, the studio added features to the interiors using elements taken from the existing set-up.

Instead of throwing materials away to make way for new "sustainable" materials, the team decided it would be more sustainable to reuse what they already had, including a set of translucent polycarbonate panels.

Previously used as decorative features, these translucent panels were paired with opaque blocks of colour and inlaid into metal frameworks to create a series of dividers that allow for flexible, adaptable working pods.

These so-called V/T Slot systems were designed by Curran and Spacon & X to combine the privacy that comes with individual cubicles with the collective energy of a co-working office.

The team installed four basic adaptable structures of the cubes on the first floor, each able to accommodate up to six workers in each team.

Panels can be added or taken away depending on the level of privacy desired, or to open up the space entirely to make room for different activities, such as the company's weekly yoga sessions.

"These V/T Slots allow us to customise the cubicles according to our needs," Space10 co-founder Simon Caspersen told Dezeen.

"This gives the team more privacy when doing work that requires a lot of concentration, leading to more productivity, or allows them to open their space up to the rest of the office to feel more social."

"The coloured panels also used in the customisable cubicles are not just for aesthetics, but are sound absorbing too – a huge benefit to creating privacy – and are made out of recycled plastic," he continued.

"So plastic that would otherwise end up in the landfills is now in our office as a signature element of the redesign of the space."

An assortment of plants dotted around the space also work to bring life to the interiors, in addition to boosting the wellbeing of Space10's employees and, in turn, their productivity.

On the ground floor, Spacon & X wanted to make use of the 1,000 square-metres of "dead space" created by a lack of any permanent interior walls by dividing it up into an experimental food test-kitchen, an event space and a gallery, using the V/T partitions.

Each of these cross-functional spaces are open to the public, offering a hydroponic system and a street-level exhibition space where Space10 presents its own work as well as projects by others working in similar fields.

The basement, formerly used as a vertical aquaponic farm, has been transformed into a digital fabrication laboratory and a tech studio, where Space10 can bring to life the designs they create on the first floor.

"We have future-proofed the office," said Caspersen. "Our walls can just be disassembled and assembled again according to our needs, which I think is a very sustainable approach to an office as it means that we are not going to outgrow the building, but the building can really grow with us."