With hot-desking, working from home and co-working on the rise, Space10 co-founder Simon Caspersen calls for the end of the open-plan office.

The wall-free layout that has dominated offices over the past decade "simply wasn't working" said Caspersen. He believes that bringing partitions back into workspaces can better support concentration and wellbeing.

Space10 did exactly this in the recent overhaul of its office in Copenhagen, designed to offer workers opportunities flexibility and privacy when needed.

"One major decision [in the re-design] was to get rid of the open-plan office; it simply wasn't working," Caspersen told Dezeen. "It was stressful, you were interrupted a lot, and you didn't feel like you had delivered the best quality of work."

"It meant that people would either work from home a lot of the time, or would stay in after-hours because that was when they could actually concentrate on their tasks," he added.

Partitions allow for an adaptable workspace

Space10 is an innovation lab set up by IKEA to explore how people will live and work in the future. Projects they have worked on include a study into the food of the future and a vision of the potential uses of autonomous vehicles.

Caspersen and his team see the future of happy and productive workspaces divided by partitions that are customised to adapt to changing needs.

Panels can be added or removed to change the office interior from private cubicles to an open meeting room or a semi-open shared area, giving employees more control over what they can get from their space.

"It is much more than having one size fits all," explained Caspersen. "We wanted to give our workers a stronger sense of ownership over their surroundings."

"Everyone, everyday, can switch between the most ideal workspace for them, depending on their state of mind, their personality, or what they are tasked to do."

Caspersen believes that this is the key to promoting mental wellbeing and productivity in the workplace.

While he sees the open-plan office as distracting and stress-inducing, he believes it is important to maintain the sense of collectivity that it offers, but in a healthier way.

"The more we focus on creating a peaceful environment for people to work in, where they are happy and satisfied and feel good, the more productive they become," he said. "So the side-effects of nurturing human beings actually results in a lot more quality work coming out."

Once believed to promote sociability and collaboration among employees, open-plan workspaces have been found by many to produce the opposite effect.

A recent study by Harvard University students found that people in open-plan offices spend around 70 per cent less time in face-to-face interactions. They instead choose to spend more time on their devices, communicating with their colleagues over email and instant messenger instead.

In today's digitally oriented world, the role of a physical office needs to be reassessed but not abandoned, says Caspersen. When every space can potentially become a workplace – homes, coffee shops, WeWorks – it's even more essential to have a tangible hub that ties people together in a common goal.

"The physical office has never been more important than now," he says. "We can work from anywhere and we can work all the time, and this shows how the lines between work and private life are really blurring." 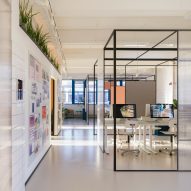 "Workers need interaction and a sense of community to feel that we are a part of achieving something together," he continued.

Space10's Kevin Curran, who led the redesign of the lab's headquarters, also believes in the importance of not just working from anywhere.

"The physical workspace fosters personal relationships, cross-pollination and a sense of community – all of which are crucial for boosting happiness, creativity and wellbeing," he said.

Face-to-face conversations spark innovative ideas, and this can't happen over email or on the office messenger channel Slack, according to Caspersen and Curran, it happens when people meet and interact.

"It is in this interaction that unplanned ideas happen," said Caspersen. "It's in the conversations between a bio-engineer and an architect over coffee, or a chef and a designer during lunch, where people discover something they can do together, or somebody has the idea that solves the problem of another person."

The increasing unpopularity of open-plan offices is also fuelling a trend for new types of office furniture geared towards wellness. At Stockholm Furniture Fair this year, soundproof pods, noise-dampening wall-panels and hooded chairs were all in abundance.