The best hotels around the world offer guests an authentic local experience, say AHEAD Global awards jury members in this movie Dezeen produced for the awards programme.

The winners of the AHEAD Global awards were announced in January at simultaneous ceremonies at Ham Yard Hotel in London and Crosby Street Hotel in New York, linked by a live video feed.

The event represented the finale of a programme of eight regional events held over two years in Europe, the Americas, the Middle East and Africa. The winners of those previous events were pitted against each other to determine the best recently opened hotels.

"This isn't about big-box hotels anymore, it's about authenticity and being relevant to the local," said Aliya Khan, jury member and vice president of design strategies at Marriott International.

Among the winners were a considerable number of conversions of buildings with a previous use other than hospitality.

"We're seeing a lot of historical buildings being converted into very nice hotels and very unique hotels, but still they're being true to what the building was before," stated Cristina Laurijssen, director of design at Rosewood Hotels and AHEAD Global jury member.

"Alila Yangshuo really stood out for me," said Laurijssen. "It's true to its heritage and very sensitive to its environment".

"They've converted the building without embellishing it, maintaining its character."

The Warehouse Hotel in Singapore, awarded by the judges for its public spaces, is a conversion of a 19th-century spice warehouse on the Singapore River into a boutique hotel by local firms Asylum and Zarch Collaboratives.

"The Warehouse Hotel really speaks to the authenticity of the location" said Khan. "It celebrates its original use but does it in an interesting and novel way."

"Through the attention to detail, whether it's the furniture or the large imposing piece of art that hangs above the public area, you get the story of the origins of the building," she continued. "That emphasis of the historical context makes the actual implementation of the design even more valuable."

While not a conversion of a historical site, the judges also celebrated Hoshinoya Tokyo in Japan for the way in which it incorporated Japanese cultural heritage in an authentic manner.

The 17-storey hotel designed by Azuma Architect & Associates offers guests a modern take on the Japanese ryokan – a traditional type of rural inn.

"A place that really has incorporated cultural heritage into a contemporary concept of hospitality experience is the Hoshinoya in Tokyo," said Serdar Kutucu, chief operating officer at Design Hotels.

"Hoshinoya brings the ryokan experience into the city of Tokyo in a way that really respects the cultural heritage, and in a way that actually hasn't been seen in any other hotels in Tokyo," he continued.

Faena Hotel, a new oceanfront hotel on Miami Beach in the USA, won the Events Spaces category at the AHEAD Global Awards for the Faena Forum, its adjoining arts and performance space.

Kutucu commended the project, which was designed by OMA, for the way in which it uses its facilities and cultural programming to create an atmosphere that draws together both visitors and Miami residents. 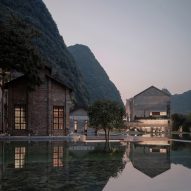 "The Faena Hotel is a great example of a hotel that can entertain locals and guests alike," he said. "Those hotels that really stand out have this community sense, they create a culture, things that go beyond creating the architecture and design."

Surveying the winners from the AHEAD Global awards, Kutucu concluded that hotels need to match the increasing demand from guests for memorable and authentic experiences.

"Hotels need to create experiences for their guests that go beyond the regular standards," he said. "People are looking for experiences that can be mind-changing or educational, and certainly should leave a memory with you after you check out."

This movie was produced by Dezeen for AHEAD. It was filmed at the Ham Yard Hotel in London. Images are courtesy of AHEAD unless stated otherwise.

The AHEAD Asia 2019 awards ceremony will take place at the Andaz Singapore today, March 7, at 9pm Singapore time.