Architects have an urgent mission, says Chris Precht, to bring food production back into the centre of our cities.

Our cities need to become part of our agricultural system. In recent decades it has become increasingly clear that the way we live and eat is a big threat to our health and the health of our ecosystem. Climate change is forcing us to rethink our way of life and to reconnect agriculture back into our urban fabric.

We need architects to reconnect the city with nature, creating buildings that appeal to all of our senses. Bringing the production of food back to our daily lives will not only democratise the food system, but also allow our cities to achieve food security.

There is a close relation between the beginning of agriculture and the birth of architecture. Our cities were shaped by food.

This is because, as the agricultural revolution ended our presence as hunters and gatherers, grain was a stable food source that allowed us to permanently settle. Farming and living were interconnected – they needed to be in close proximity due to a lack of efficient transportation and refrigeration. So all ancient settlements were dense areas with food distribution compounds at their centre and farmland in their surrounding.

Our cities were shaped by food

A close connection between food and our urban lives is still traceable on the maps of our cities and their street names. Near the River Thames in London you can find Cornhill and Fish Street, because grain and fish came on and from the river, while northern parts of London are named after meat and its production, because animals walked into the city before being slaughtered.

The invention of the railway, pasteurisation and refrigeration changed the delivery system of our food. The production and the consumption no longer depended on close proximity. All of a sudden it was possible to overcome long distances in a short amount of time and the food could be kept fresh for a longer. That made it possible to grow food far away from sight and mind. We became distant to it. We no longer witnessed the slaughtering of pigs or the dirt of the harvest, and merely became consumers of the end product.

With this disconnection to the origin of our food, we lost an understanding of its importance. 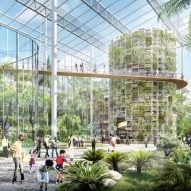 Over the years, industrialisation has made farming incredibly efficient when it comes to the amount and profitability of food we produce. But it has made us all dependent on a system that only a handful of multinational cooperations can deliver.

Meanwhile our growing disconnection to food has transformed our urban areas. No longer constrained by farmland, cities have grown indefinitely. They have swallowed up agricultural land and covered the last connection people had with the soil that once fed them. And with the advent of high-rise living, we are more distant than ever to the natural environment.

The problem we are now facing is that food is eating our natural resources. Agriculture occupies more than a third of land on our planet and crop production has led to the deforestation of 40 per cent of our woodland. It uses 70 per cent of our freshwater reserves and emits almost one third of all greenhouse gases.

The way we produce, consume and waste food is a massive threat to our health

The way we grow our food is also a big threat to biodiversity, because we mainly grow crops to fatten domesticated animals. And it is about to get worse.

As urban populations grow and more developing countries adopt the western diet, the footprint of our food will increase dramatically. It is estimated that in the next 50 years, more food will be consumed than in the last 10,000 years combined.

The way we produce, consume and waste food is also a massive threat to our health. Issues like obesity, diabetes, and malnutrition are a direct outcome of our unwholesome diet.

The construction industry is equally harmful. We produce 39 per cent of global CO2 and account for more than a third of the world's energy use. The building industry is the biggest polluting sector of our globe and we as architects are a part of that.

It will come as no surprise to hear that the international style is shaping our cities faster than any other. In disregard of location and a local climate, our cities are filling up with concrete frames and curtain walls. So, just like in agriculture, we are killing off thousands of years of place-defining culture.

The richness of a culture has a lot to do with its food and its buildings. We are on the brink of losing both.

Within this system that capitalises everything for economic growth, nature has lost its value. We all know the devastating impact we have on our planet. But the problem didn't surround us for a long time, because we pushed it outside of our cities and outside of our minds. At last we're finally realising the devastating effect it is having on our physical and mental health.

Today around 90 per cent of the world's population breathes polluted air. This results in around seven million premature deaths per year – almost equal to the size of my country, Austria.

We need to stop spending billions on grey infrastructure

The health of our planet is vital for the survival of our species. We still share the DNA with our hunter and gatherer ancestors, and our brains are wired so that we need fresh air, sunshine, green grass and clean water. We need to stop spending billions on grey infrastructure, and instead spend money on green projects that can reconnect us with nature.

The current state of agriculture and architecture paints a dark picture. But there is hope.

People around the world are asking for healthier alternatives to their current diet. Governments are supporting farmers markets, seed education classes and urban gardening, with the prospect of food security for their cities. The market is starting to agree as well; as organic food sections in supermarkets grow, sales of frozen food and microwaves plummet.

This creates an opportunity for buildings that have food as their foundation.

It is estimated that 80 per cent of all food will be consumed in urban areas by 2050. Combine that with the proposition that a healthy diet demands food that is grown nearby the consumer, and the answer is clear: our cities must become part of our agricultural system.

Some people are taking action into their own hands. From personal gardens on balconies and communal greenhouses, to edible facades and vertical farms.

As a grassroots movement, this makes economic and ecological sense. With a smaller distance to be delivered, vegetables would be less likely to spoil. And as supply chains shorten, the need for packaging, gas for delivery and energy for refrigeration reduces as well.

Vertical farming take this idea even further. These systems can produce a higher ratio of crops per planted area. Plus the indoor climate of greenhouses protects the food against varying weather conditions and offers the possibility to monitor each plant.

Another premise of vertical farming is that it runs on the loop of byproducts. Buildings create a large amount of energy and heat, which can help plants like potatoes, nuts and beans to grow. Food waste can be locally collected, turned into compost to and be used to grow more food. Meanwhile, vertical gardens can act as climate buffers between buildings and their surroundings, helping to naturally ventilate the spaces within.

As a young architect, I am part of a generation that is not concerned with styles, forms or academic theories. I believe our mission is more urgent than that. The important tasks of our time – reversing climate change, increasing natural habitat, creating a healthy food system – are now part of the architectural profession. The solution to theses problems will involve a balance between technology and empathy.

I am fully aware that buildings like The Farmhouse, our new proposal, can not solve the problem of feeding two billions mouths by 2050. This change needs to come from climate-appropriate agriculture, clean meat and a boost for local, organic farmers.

But I believe that it does something else important: it creates a visible and mental connection to food. It puts agriculture back into our cities and into our minds. It creates a different typology of a tower that not only consumes from its surroundings, but also gives back to its environment. A tower that is not an isolated island in the city, but an integral component of a healthier and tastier city.

Chris Precht is co-founder of Precht, an architecture studio in the mountains of Austria, where he and his wife Fei grow their own food. From this remote location, they work on global projects to reconnect nature and architecture. Precht is also a co-founder of architecture and design studio Penda.
Read more: