Amsterdam-based product designer Ernst Koning has invented a portable hexagon-shaped Faraday cage to help us switch off from our smartphones.

Described as a "fancy Faraday cage" – a mesh-wrapped electromagnetic-proof shield – Block is an aluminium case that can store up to seven smartphones, blocking all their connections.

The original Faraday cage was invented in 1836 by English scientist Michael Faraday.

Like Faraday's invention, Block uses its aluminium skin to dissipate any electric currents generated from external or internal electromagnetic fields including wifi and all other telephone signals.

"Just put your phone in it and close the lid. Block will block all incoming and outgoing signals, enabling you to be more present in the moment," said Block designer Ernst Koning, who argues that being offline has become a luxury.

"Two-thirds of the world's population has a smartphone. Moments without rings, pings, pushes and requests for responses have become rare," Koning continued.

"Block gives people a healthier relationship with their smartphones and a chance to reconnect with family and friends, get things done, or just switch off for a moment."

Block claims that its hexagonal case, which comes in yellow, black or green aluminium, is more effective than simply switching off the phone, as it removes the device from the user's sightline.

The brand says that recent studies show that even having your phone visibly nearby will distract you from real-life social engagement and reduce focus and brainpower. 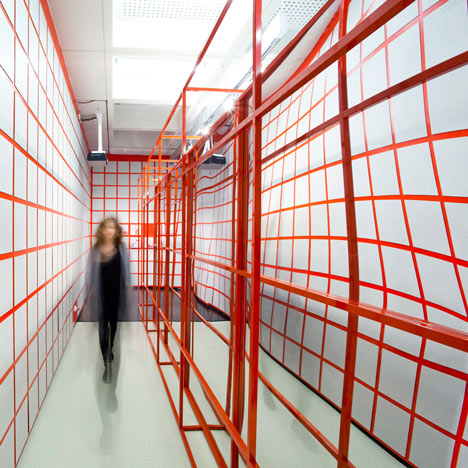 As a next step, Block says it will start collaborating with photographers, animators, writers, sculptors, audio designers, and painters to address and reflect on the topic of being offline in an increasingly digital world.

The first collaboration will be with 3D-designer Tim van der Wiel and audio designers Kloaq.

Other designers who have tried to tackle smartphone addiction include Royal College of Art graduate Matteo Bandi, who presented a series of objects that only work when connected to a smartphone, that he designed to help us live in the moment.

In 2017 designer Klemens Schillinger created a set of therapeutic phone-like objects, to help smartphone addicts cope with being away from their devices.

Meanwhile, Serbian studio Alter Ego Architects designed a concept for a 3D-printed mobile phone with an interface that only features numbers and symbols, and has no apps to prevent users acting like "mindless zombies" while on their devices.