Nike designer Tobie Hatfield and British Paralympian sprinter Sophie Hahn explain how the Nike Air Zoom Pegasus 35 FlyEase is easier to put on that normal shoes, in this movie produced by Dezeen for the sportswear brand.

According to Hatfield, senior director of athlete innovation at Nike's Innovation Kitchen, the trainers were designed to make it as easy as possible for athletes to put them on or take them off.

"It's a high-performance shoe that's easy to get into, easy to secure and easy to get out of without compromising performance" said Hatfield in the movie, which Dezeen filmed at a training session at Loughborough University at which Nike-sponsored sprinter Hahn demonstrated the functionality of the shoe.

Trainers normally require the wearer to articulate their ankle and insert their foot downwards into the top of their shoe. However, the Zoom Pegasus 35 FlyEase opens at the heel, allowing athletes to slide their foot horizontally into the back of the shoe.

To put the trainer on, its wearer pulls a tab to unfasten a zip across the back of the ankle, peeling away the heel of the shoe. They can then slide their foot in, before pulling the heel tab across in the opposite direction to zip it up again.

In lieu of regular laces that are tied and fastened over the tongue of the shoe, the Zoom Pegasus 35 Flyease features a cord at the heel that secures a snug fit when pulled.

All of these actions can be completed with one hand, allowing athletes of varying abilities to put the shoe on with ease. 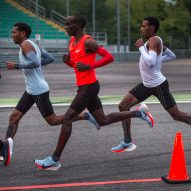 "This is the first time that I've actually tried them out, and they're very easy, comfortable and light," said Hahn, who holds the Paralympian record for the 100m in the T38 classification.

"As a sprinter, you can't have any distractions, so you need something that's quick and easy to untie and slip your foot into," she continued.

According to Hatfield, the shoe was designed in close collaboration with athletes.

"To see Sophie finally in the shoe is really a culmination of a three year process of understanding what the needs of the athlete and designing for those needs," he stated. "And that's what we do at Nike - always listen to the voice of the athlete."

Nike has also recently launched a pair of laceless basketball trainers. The Nike Adapt BB shoes tighten at the touch of a button or swipe of a smartphone. Last year the sportswear brand has also created the first running shoes with 3D-printed uppers.

This movie was produced by Dezeen for Nike. It was filmed at Loughborough University. Images are courtesy of Nike.