New York designer Shaina Garfield has created an eco-friendly coffin that uses fungus to biodegrade the body so that it decomposes quickly and fertilises the surrounding soil.

Called Leaves, the sustainable coffin offers an alternative to traditional burial methods, which can be damaging to the environment.

"At death, our species actively disconnects from nature," said Garfield. "While all other species decay and return to earth, we strive to do the exact opposite."

"In the US, we deplete immense amounts of resources to make our coffins, we emit toxins into the air during cremation and we contaminate our water during embalming, the chemical process used to clean our bodies after death," she explained.

Previewed at Design Indaba, the concept involves wrapping the body in natural cotton, laying it on a pine wood surface and securing it with a woven netting of rope that has been laced with fungal spores.

Once the body is buried, the fungi multiply and speeds up the body's decomposition while absorbing its toxins so that only natural byproducts, such as oxygen and nitrogen go into the soil.

The aim is for the human body to return to nature. "Leaves thinks about how fungus can be the connection that brings humans back to the circle of life," said Garfield.

"It provides us with the opportunity to acknowledge the transformation from death into new life. With the use of fungus, it helps our bodies have a greater purpose after death," she explained.

After one year, the soil is healthy enough for a tree to be planted above the burial site as a "physical memorial".

"This transforms our definition of a cemetery from a place with loads of dead bodies to a beautiful park full of new life," said Garfield. 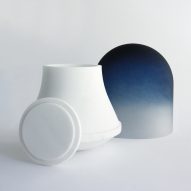 "Leaves creates the conversation that not many people want to have. Rather than being afraid of death, we can celebrate returning to the earth and becoming new life. Most importantly, through life and death, let us remember to embrace our true selves: that we are nature."

Design Indaba took place this year between 27 February and 1 March. Other projects on show included an IKEA homeware range created by African designers and an exhibition exploring the idea of beauty.