Central Saint Martins product design graduate Marie-Claire Springham has invented a hormone kit that enables fathers to lactate so that they can share breastfeeding duties.

Still in prototype stage, the "chestfeeding" kit contains a breast pump, a compression vest and hormones that help to stimulate lactation.

Springham believes that the kit could help to reduce the pressure on new mums while allowing dads to build a better bond with their babies.

Fathers-to-be would take progestin and domperidone

Springham said that the "chestfeeding" process would involve couples signing up to a pre-natal course at the beginning of their pregnancy. Once signed up, fathers would receive a nine-month supply of a drug called progestin, which is currently used as a non-oestrogen-based oral contraceptive pill.

In both sexes, the hormone changes the breast tissue so that milk can be stored. Six weeks before the birth, the father starts taking a drug called domperidone.

Domperidone was originally used to treat gut conditions before it was discovered that one of its side-effects was inducing lactation. The drug is now used by mothers struggling to produce breast milk.

According to Springham, by taking the drugs over the course of nine months, fathers can stimulate ordinarily dormant breast tissue to grow milk ducts that will be ready to produce "chest milk" in time for the birth.

The pump supplied with the kit acts as a regular breast-pump that a nursing mother would use. However, Springham has moderated the design language to make it "less intimidating and more user-friendly".

It sits flatter to the chest than most commercial products, is operated by a simple hand-pump held to the side of the body and is easy to move around in. 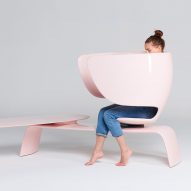 The compression vest is the male equivalent of a maternity bra with a zip down the front for easy access.

"I figured as many chestfeeding dads can grow up to the size of a B cup, they could use the extra support," Springham told Dezeen.

Having discovered that one of the main triggers for postnatal depression in fathers is feeling left out, and that for mothers depression can often be caused by struggling to breastfeed, Springham believes that the kit could have benefits for both sexes.

"The kit began as a piece of conceptual design," she explained. "I was trying to create an empathy tool to enable parents to support and understand each other better, while also questioning gender and parenting roles."

"As the project developed however, it also became a practical way of helping couples that are struggling with postnatal depression as well as single sex couples and dads who want to be more engaged."

The hormone cocktail of progestin and domperidone that Springham's kit provides has since received medical backing that supports multiple historical precedents of men being able to sustain human life through their "chest milk".

Medical trials required prior to sale of the kit

Springham told Dezeen that she has received many emails from new parents of both sexes who want to be involved in medical trials and is "stunned" by the positive response.

"It may seem unconventional but there appears to be both support and demand for this kit as a real life product," she said. "I would love it to help people in a practical way, as well as being a tool to discuss some of our most strongly held gender norms." 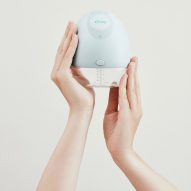 Springham said that the kit could be available to buy in as little as five years time.

"These drugs are already safely used by nursing mothers," she said. "However medical trials are notoriously unpredictable and there are still plenty of questions that need answering before it can be released to the public."

Other recently launched designs that address infant feeding include a cordless breast-pump designed to be worn inconspicuously in any nursing bra and a breastfeeding bench for use in public spaces, to offer comfort and privacy to mothers when tending to their babies.