Technology company Elvie has launched a cordless breast pump designed to be worn inconspicuously in any nursing bra.

Unlike most devices for expressing milk, Elvie's breast pump is compact and wire-free, so new mothers can move around freely without being bound to sit by a power socket.

It also promises a "revolutionary technology that eliminates noise", meaning people who have recently had babies can more discreetly pump in public. Elvie describes it as "the world's first silent wearable breast pump".

The design features a hub that contains the pump mechanism, with a reusable bottle that attaches below to form an oval shape.

The bottle holds a little over 150 millilitres of liquid, and there are two in every Elvie breast pump kit.

Optionally, the breast pump can be used with an accompanying smartphone app that monitors milk volume in real time, shows pumping session history and allows remote control over the device. 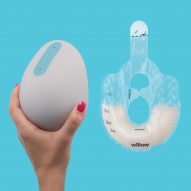 It fits in any standard nursing bra and comes with a bra adjuster toggle so the wearer can easily loosen the garment when they want to wear the device. It is electric and rechargeable.

The breast pump is the second product from Elvie, which was founded in 2013 by women's health expert Tania Boler, in partnership with entrepreneur and investor Alexander Asseily, a co-founder of Jawbone.

"We approach problems as women and solve them as engineers, scientists and designers, starting with a real need and innovating around it," says Elvie on its website.

"Women shouldn't have to make do with shoddy design or pink spin-offs when there are self-driving cars in the world," continues the company.

The promise of inaudibility and the compact design is a point of difference between Elvie's breast pump and another cordless model by Willow. The design also features a reusable bottle instead of disposable milk sacks that need to be replaced.

Elvie launched the breast pump last week accompanied by a music video made by creative agency Mother featuring a dance troupe of new mothers and lyrics that bemoan their being made to feel like dairy cows while expressing milk.

It is currently running a wait list for orders for the pump, with new stock expected in October.