Hong Kong's government has unveiled a £60 billion infrastructure project to address its land shortage by building one of the world's largest artificial islands.

Called Lantau Tomorrow Vision, the 1,000 hectares of reclaimed land near the island of Lantau would be enough space for 260,000 homes, said government officials.

If it goes ahead it would surpass Hong Kong International Airport, designed by Foster + Partners, as the fourth largest artificial island in the world, and would be the city's largest infrastructure project to date.

Most of new homes would be public housing

The plan is an attempt to address the city's "serious shortage of land supply", Hong Kong's secretary for development Michael Wong was reported as saying in CNN.

The government plans for 70 per cent of the homes on the island to be public housing. However, the plans has not been received positively by all of Hong Kong's residents, with several groups protesting over the financial and environmental impact of the giant infrastructure project.

Protests against the cost of the development have been spearheaded by the Save Lantau Alliance, which has written an open letter to Hong Kong's chief executive Carrie Lam, calling the project a "white elephant" and demanding it be withdrawn "immediately".

This new island would be almost twice the size of Dubai's 560 hectare Palm Jumeirah, and at HK$624 billion (£60 billion) would cost six times as much as much as the Palm's reported US$12 billion (£9 billion). 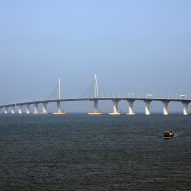 Wong rebuffed concerns the project would halve Hong Kong's estimated reserves of HK$1.16 trillion (£11 billion), saying the government would make back the money with land sales from the new island.

Climate activists are also opposed to the plan, warning the artificial island would threaten the rare and endangered pink dolphins local to the waters around Lantau.

At a protest held when the plan was first announced in October 2018, Greenpeace Hong Kong called on the government to develop brownfield sites to address the housing crisis instead.

Officials have promised a conservation fund of £96 million will be included in the Lantau Tomorrow Vision budget.

Local marine wildlife is already under threat from the Hong Kong-Zhuhai-Macau bridge, a 55 kilometre road bridge linking Hong Kong to Macau made up of cable-stayed bridges, artificial islands and an underground tunnel.

A second 700 hectare island is also planned for the Lantau area, but details of its purpose and cost have not been released yet.

Main photo is by Base64.