French designers Ronan and Erwan Bouroullec have collaborated with Swarovski to design six bronze fountains embellished with over 3,000 crystals on the Avenue de Champs-Elysées in Paris.

Positioned in a pool of water, each fountain is comprised of a central bronze mast that supports three angled-poles suspended from the top of the structure.

The three branches feature 258 custom-made Swarovski crystal elements arranged as circular cuffs around each pole and illuminated by LEDs.

Each structure slowly rotates as water rises up the masts and cascades down through the crystal-covered tubes into the pool below, causing them to shine "like a moving chandelier with different light moods by day and by night".

During daytime, sunlight plays with the running water and crystals to create continuously changing, glistening effects, while at night the LEDs softly illuminate the arms of the structures.

Positioned around the Champs-Elysées Marcel-Dassault roundabout, this is the first time Swarovski crystals have been used in a permanent outdoor installation in a public space.

The Bouroullec brothers worked with Swarovski's engineering team in Austria to create 3,060 durable faceted-crystals for the project, as well as the LED system used to illuminate them. 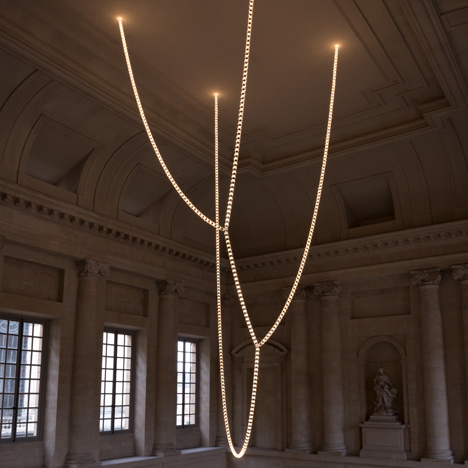 "Swarovski's technical expertise also allowed us to design a crystal that would withstand harsh weather conditions and environmental changes due to its composition and mode of assembly," said Ronan Bouroullec.

In a bid to make the fountains both energy efficient and sustainable, this lighting system includes 60 metres of LED strips that produce a total light output of 517 watts.

According to the brothers, it was important to achieve a balance between the grandeur of the 13-metre-tall structures and the delicacy of their composition and materials in order to pay respect to the historical setting.

The group of fountains align with the height of the surrounding trees to blend in with the environment, while each of the crystal components have been connected together without any visible components, to achieve the illusion that they are "floating".

"For this project, it was important for us to stay in keeping with historical tradition by choosing crystal, a material similar to the glass that was already found in the previous fountains on the Champs-Elysées," said Ronan Bouroullec.

The crystal fountains are the first project by the Fonds pour Paris foundation, Paris' private endowment fund, which aims to revive Parisian heritage by enhancing the city's public spaces through contemporary art.

The fountains have been out of service since they were damaged during celebrations for France's World Cup victory in 1998. After more than 20 years of disrepair, restoration of the six basins took a total of three years.

This is not the first time the Bouroullec brothers have collaborated with Swarovski. The duo previously worked with the luxury crystal brand to install a chandelier at the entrance to the Château de Versailles, France, comprised of looping cords of illuminated crystal.

Last year the brothers also added to their repertoire of public installations with a marble water-feature and circular steel bench installed in Vitra's campus-like headquarters in Weil-am-Rhein, southern Germany.