The two-part installation – titled Ruisseau and Ring – is set within a grassy field directly in front of the Herzog & de Meuron-designed VitraHaus building.

It comprises of a tapering slice of grey marble and a band of galvanised steel that runs around a mature cherry tree.

A tap has been fitted at one end of the marble block, allowing water to run down a narrow groove carved out of its centre. The metal ring is intended to serve as a bench where visiting groups can gather and relax.

According to the Bouroullec brothers, the installation explores the different ways in which humans interact with urban and natural settings.

It builds upon ideas first examined in the brothers' Rêveries Urbaines exhibition, which was held at the Vitra Fire Station in 2016. 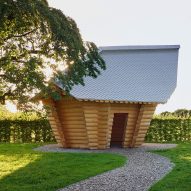 Focusing on the development of cities, the show featured 14 models that each looked into how plants, animals and water could be better integrated into built-up areas.

"Our aim is to give a new sense of magic to the places where we walk, meet, and talk," explained Ronan Bouroullec in a statement.

"The scenarios we develop should consequently be both pragmatic and poetic."

The installation was revealed during this year's Design Miami/Basel fair, along with an asymmetrical log cabin that German artist Thomas Schütte created for the site.

Two years ago the brothers created a floral installation on the campus to honour the sudden passing of architect Zaha Hadid, which consisted of 120 specially-made cylindrical vases filled with tall flowers and grasses.

Most recently the design duo has made a pared-back chair for Danish brand Hay, which they likened to the simplicity of a "white T-shirt or blue jeans".