IKEA worked with UK artists and designers to create this series of animal habitats, repurposed from the company's used furniture.

Architects Studio Weave and designer Adam Nathaniel Furman are among the creatives to have contributed installations to the Wildhomes for Wildlife project, which has seen IKEA products transformed into insect towers, bat shelters and bird boxes.

The project was masterminded by IKEA's creative partner, the advertising agency Mother, to promote the opening of IKEA Greenwich — its "most sustainable store", according to the Swedish company.

"Now all of our new neighbours can enjoy an amazing home," said IKEA. "Even our furry, feathered and flying friends."

Bold Memphis-style shapes and colours recur among the designs, including Furman's Bughattan, a totem pole-like tower with holes cut into it that invite bees and wasps to stop and rest. Furman created it from IKEA Eckbacken and Hammarp worktops.

Pipi has roughened surfaces on the inside to help the bats get a good grip for roosting, while Dom has a nesting box that can only be accessed by small birds like blue tits.

Architect Je Ahn, the co-founder of Studio Weave, contributed a more austere bat house design in the form of Fladdermösshus. Hanging stalactite-like from tree boughs, the structures are made from Kvistbro metal tables and are painted black to create extra warmth.

Other participating architects were Sash Scott and Tamsin Hanke, who created the freestanding Hachi House, "an eye-catching bee house fit for a queen", from Industriell and Verberod benches.

Månstråle House by architects Beep Studio is a more organic-looking design with old Stråla lamp stands repurposed into nesting pods for birds, while Honey I'm Home! by artist Hattie Newman is a "Brazilian-style" bee village that was once Burvik side tables.

Leftover cladding from the Greenwich store also makes it into one of the installations, The Bug Bed by designer Iain Talbot, where it is combined with old IKEA chairs and filled with Thanet Sand to attract insects to nest. 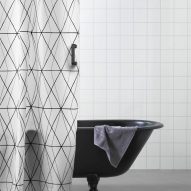 IKEA and Mother have worked together since 2010, creating the "Wonderful Everyday" campaign as well as a recent rubbish-clearing boat.

For its latest store in Greenwich, which opened on 7 February, IKEA has continued the sustainability push it has become known for in recent years, with green technologies such as solar panels, rainwater harvesting, geothermal heating and 100 per cent LED lighting.

However, Dezeen deputy editor Tom Ravenscroft has criticised the store's sustainable credentials, since its construction required the demolition of another green building, the Sainsbury's Greenwich, just 17 years after its opening.