A new wooden frame would be mounted onto the remaining social housing structure and fitted with customisable housing units.

"By introducing new living spaces into the estate and building over the existing roof, the housing density can be enhanced," the designer told Dezeen.

Both the structural frame and the attachable modules could be pre-cut and partially constructed offsite, before being installed on the estate and secured with tension cables.

Internal walls with integrated seating and storage would be plugged into the main space in order to maximise the floor plan.

In addition to being easy to fabricate, the new homes are intended to be adaptable, allowing occupants to add or subtract floorspace and facilities according to the varying requirements of both the occupants and the community. 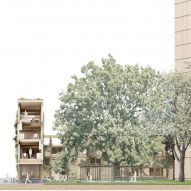 "The first two levels of the existing flats can be converted into co-living units, which can then be transformed into co-working spaces when residents move out," said Ho.

"This can also contribute to the funding for other parts of the development in the estate," she added.

The housing estate is located on a slope, resulting in a long, three-storey-tall building that steps back from the street at the level of each floor. The existing balconies created by this staggered form would be repurposed for additional floorspace, or replaced with a translucent skylight to allow more natural light to enter the apartment below.

"The project aims to improve the existing conditions in terms of lighting, thermal and ventilation qualities," claims Ho.

The ground floor would be occupied by small businesses and community-enhancing services.

Revenue generated from these units would subsidise the maintenance of the estate and other on-site developments.

"Shops and services can be introduced into the lower level of the existing flats, to generate extra funding," she said.

"When the community no longer need to generate that much funding, the space can be converted into a nursery space."

Ho believes that her proposed system would have the potential to replace the current plan to disband the community and demolish the entire estate, in order to build an additional 400 brand new homes.

"By retrofitting with only small-scale demolitions instead of total redevelopment, both the estate and existing community can be kept in pretty much its true form," said Ho, "which would make the community happy."