White Arkitekter has designed a hedge-like band of housing that could be built around existing London estates, to add homes without the need for demolition, in the latest instalment of our Dezeen x MINI Living series.

The modular system is designed to be assembled quickly using prefabricated units that can be adapted to suit the large variety of estates in London. The architecture studio claims this would significantly reduce the costs of the apartments.

"This solution leads to better affordability as there is a low site cost, no demolition and loss of existing affordable homes," the studio told Dezeen.

The apartment blocks would feature semi-transparent facades covered with plants, that are designed to become a part of the green spaces they surround – like a hedge.

Available space on the ground floor of the apartment blocks could house small businesses such as cafes and shops in an effort to "activate the street" according to the architecture studio.

The buildings would feature duplex apartments made from natural materials such as wood.

The studio designed the concept with the aim of breaking the pattern of demolishing affordable housing for big private developments, a frequent occurrence in London.

The architecture studio claims that the developers that replace post-war social housing estates with high density developments often do so without offering replacement affordable housing. 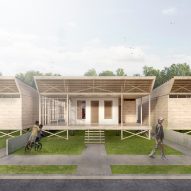 Modular housing system allows you to add rooms to your home

The studio believes that densifying existing plots is a more socially sustainable way to create housing.

"Densification alone can lead to new build developments which move out existing tenants and replace affordable rented homes with unaffordable homes for sale," said the studio.

"A more socially sustainable solution would be to retain existing affordable homes along with their residents and add more."

White Arkitekter also believes that surrounding an estate with a barrier made of housing would improve the use of the green spaces around the existing buildings, for its residents.

"They are spaces that separate the buildings from the city rather than acting as the green landscape they were intend for. Hedge House creates better spaces on both its sides: a calm park protected from street noise, and a lively city street."

The project won the BB-Green Award in the London Affordable Housing Challenge, an open call competition to come up with innovative designs to increase London's housing stock.