The Grasshopper, a chair designed 81 years ago by Danish designer Finn Juhl, has been reissued by the furniture brand that bears his name.

The chair is being unveiled at the Salone del Mobile furniture fair, which opens today as part of Milan design week. Until now only the two original chairs made by Juhl in 1938 existed.

"It seemed natural that this chair should be brought back to life at some point," said co-founder of House of Finn Juhl, Hans Henrik Sørensen, who will show the chair at the Salone del Mobile.

"Ever since I bought the book Håndværket viser vejen [The Craftsmanship Leads the Way] as a teenager, in which the Grasshopper was depicted, I have always been fascinated by this expressive chair."

With an oak or walnut frame, and upholstery in fabric or leather, the back legs and armrests converge to a point on the floor at the back of the chair, giving the impression of the bent legs of a grasshopper about to jump.

The buttoned back of the chair extends up from the base and curls around on each side at the top to cocoon the sitter. This gives the piece the look of an insect-like head.

"The Grasshopper gives you the impression of something powerful and springy – it is both graphical and organic at once, almost animalistic in its expression and in its details," said Sørensen. "Just take a look at how each part plays with shape and profile – the round and the concave that gently meets in a delicate joint."

The company's designers used Juhl's original sketches to reproduce the chair exactly as the designer would have intended.

By measuring one of the original chairs and comparing these with the sketches, its Japanese craftsmen were able to recreate the piece of furniture to the exact dimensions of the original.

Despite its simplicity, the chair is difficult to construct as it is formed from a series of complex shapes, joints and angles.

Sørensen described the Grasshopper as "the most troublesome Finn Juhl design to develop", because of the complexity of the design.

Born in 1912, Juhl was one of the most influential Danish furniture and interior designers of the 1940s and 1950s. Among his best known works are the interiors of the Danish Broadcasting House, Copenhagen Airport and the Trusteeship Council Chamber at the UN headquarters in New York.

Juhl originally showed the chair at an exhibition to present the work of the Danish Cabinetmaker's Guild in autumn 1938, on the stand of the respected cabinetmaker Niels Vodder, but the reception to it was lukewarm.

After the fair, Juhl bought the two chairs from Vodder to help recoup the cabinetmaker's losses and the sketches remained in the designer's archive until House of Finn Juhl acquired exclusive rights to all the designs in 2001, following his death in 1989.

The company has reintroduced a number of Juhl's designs over the years, including the FJ 136 chair that was shown at Milan design week three years ago, before House of Finn Juhl became a separate brand within its parent company Onecollection.

The reissued chairs will be individually numbered, but the first chair produced by House of Finn Juhl has been given the number three, as chairs one and two are considered to be the original designs.

Juhl trained as an architect at the Department of Architecture at Copenhagen's Royal Academy of Arts, but ended his studies early to work in the studio of prominent architect Vilhelm Lauritzen.

He went on to become one of the most revered Danish furniture designers, as well as working as an architect and industrial designer. Alongside furniture design, he is perhaps best known as the person to introduce modern Danish design to America. 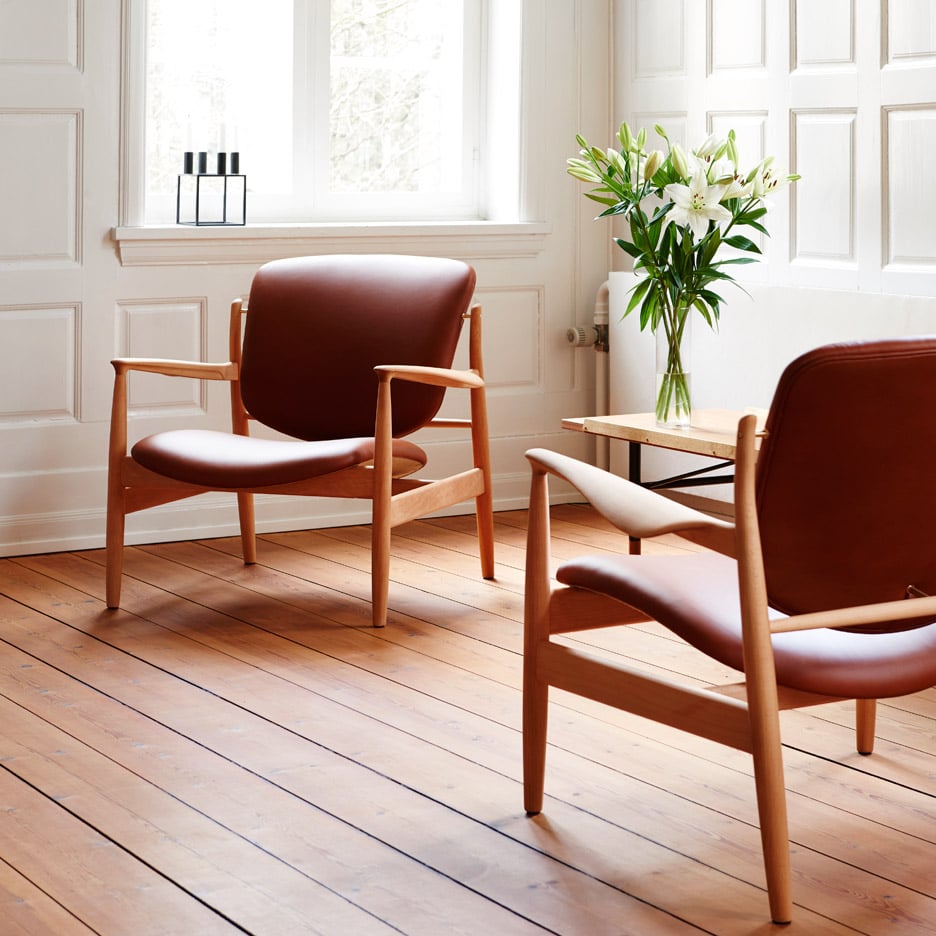 His work has become highly prized amongst collectors. In November 2018, one of the two original Grasshoppers was auctioned for €319,000 (£275,000) at Artcurial in Paris.

The reissued Grasshopper chair will be on display in Hall 24, Stand A07 at the Salone del Mobile fair.