Milan 2016: furniture manufacturer Onecollection has relaunched a 1956 chair by Finn Juhl, which played an important role in the proliferation of Danish design (+ slideshow).

Its form is typical of mid-century Danish furniture, with an organically curved wooden frame, and separate upholstered backrest and seat.

However, it was created for industrial production so featured a more simple construction than many of Juhl's other designs.

The chair was aimed at the American market, and has since been credited with helping to grow the international market for Danish furniture. 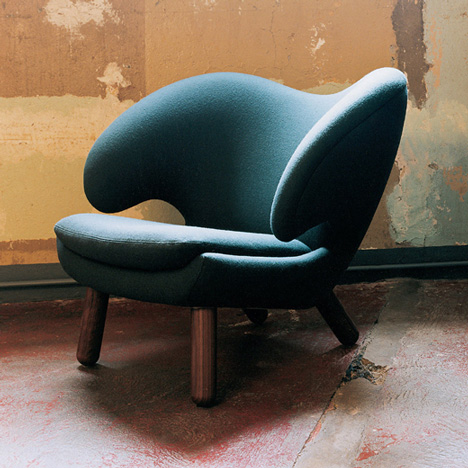 The story of the chair's impact on the country's export market is outlined in a new book by France's son James.

It describes how C W F France came to Denmark in the 1930s to help a friend run his mattress factory, but was sent to Germany as a prisoner during the second world war.

During his time in prison, he formulated a business plan that he put into practice when he returned to Denmark in the 1950s.

France started partnerships with Danish furniture designers, including Juhl, to developed high-quality furniture that could be produced at an industrial scale and sold flat-packed.

This paved the way for exporting furniture at a fraction of the usual cost, and sparked trends for Danish design in Germany, the UK and the US.

"The story about France is part of the great Danish design history," said Onecollection director Henrik Sørensen, who founded the company in 1990 by Ivan Hansen and gained exclusive rights to produce Finn Juhl's sculptural furniture in 2001.

Juhl – who died in 1989 – was a Danish architect, interior and industrial designer, but was best known for his furniture such as the wing-backed Pelican chair.

Onecollection received permission from James France to rename FJ 136 as the France chair. It is available in beech, oak or black-stained versions, and with either leather or fabric upholstery, from Paris showroom Triode.

Mid-century Danish design has seen revival in popularity over the past few years. Brands including Carl Hansen & Son, PP Møbler and Fritz Hansen all have delved into their archives and reissued iconic furniture pieces by designers including Hans J Wegner, Arne Jacobsen.