Boxy forms wrapped in Danish brick and large stretches of glass form this California residence, which was designed by US firm EYRC to capture light and connect to the outdoors.

The Waverley house sits on a half-acre site in a leafy, century-old neighbourhood in Palo Alto, just a few blocks from the home of late Apple CEO Steve Jobs. Created for a young couple, the Silicon Valley residence features a main dwelling and a detached guest house.

Meant to be "a study in strong, simple composition", the home consists of rectilinear volumes that are offset in plan. In the front of the dwelling, the upper portion cantilevers over the ground level, appearing to gesture toward the street.

"The massing defines solid and void, captures natural light and connects the indoors with the landscape – seeking to experience the outdoors from within," said Ehrlich Yanai Rhee Chaney Architects (EYRC) in a project statement.

The team aimed to give the home a museum-like quality, and prioritised materiality and craft.

Lower exterior walls are clad in grey, hand-fired bricks from Denmark that are longer and thinner than traditional bricks. The dimensions are meant to emphasise "the horizontality of the architecture that lays solidly on the land".

The upper walls of the home are covered with stainless steel panels. Fascias are wrapped in bronze, while honey-toned wood was used for soffits.

The main dwelling provides varying levels of transparency. In the front elevation, the lower level is opaque whereas the upper portion is defined by a large glazed wall with thin aluminium frames. In the rear of the home, the team incorporated floor-to-ceiling glass.

Encompassing 5,000 square feet (465-square metre), the main dwelling is divided between public and private zones. On the ground level, one side contains an open-plan kitchen, dining area and living room, while the other houses the master suite and a guest bedroom.

Upstairs, the team placed a study that connects to an outdoor deck. The home also features a basement-level wine cellar and tasting lounge, which look upon a zen garden that is open to the sky above.

All three levels of the home are connected by a grand staircase made of "floating" stone steps. The stairwell is lined with a continuous pane of glass measuring 30-by-10 feet (nine-by-three metres).

"Due to the unprecedented size of this glass in residential design, it was custom manufactured in Germany and shipped to California," the team said. "This dramatic moment in the sequence of progressing through the house helps visitors feel connected to the lush landscape outside."

The interior of the home features earthy materials and a neutral colour palette with pops of bright hues. The team incorporated a number of bespoke elements, including a mesh screen that can close off the kitchen from the adjacent great room. 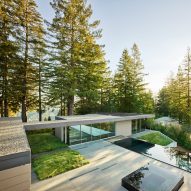 "The steel screen slides along a track embedded into the teak-slatted ceiling and disappears into the pantry when retracted," the studio described.

A covered walkway connects the main dwelling to the 1,700-square-foot (158-square metre) guest house, which also contains a fitness studio. The central portion of the building was cut away to bring in light and provide a strong connection to the outdoors.

Both the front and back yards offer an array of endemic plants, including oak trees.

"The landscape integrates California native plant species, grasses and trees to complement the materiality of the architecture," the team said.

Formerly known as Ehrlich Architects, EYRC was founded in 1979 and won the AIA Firm Award in 2015.

Other projects by the studio – which has offices in Los Angeles and San Francisco – include Spring Road House in Marin County, which consists of stacked boxes wrapped in terracotta and glass.

Photography is by Matthew Millman, unless stated otherwise.