This captioned video produced by Dezeen for Autodesk reveals Philippe Starck's A.I. chair for Kartell, which the software company claims is the first chair designed using artificial intelligence to be put into production.

"This is the first chair in production created by artificial intelligence in collaboration with human beings," said the software company.

Starck used Autodesk's prototype software to create a strong, stable chair using minimal material, via a process that he described as "a lot like having a conversation".

"Kartell, Autodesk and I asked the artificial intelligence a question: do you know how we can rest our bodies using the least amount of material?" Starck said.

"Artificial intelligence doesn't have culture, memories or influences and so can only respond with its 'artificial' intelligence. A.I. is the first chair designed outside of the human brain, outside of our habits and how we are used to thinking."

Through inputs by Starck, the software went through a process of learning in order to create a chair that was comfortable, structurally sound, and adhered to both Kartell and Starck's aesthetic preferences.

Autodesk described the final design of the chair as a "collaboration" between Starck, Kartell and the software. 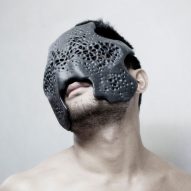 "Working with the AI-assisted system was a lot like a child learning," Autodesk said.

"As the conversation continued and Starck became more sensitive to the ways in which he described what he wanted, the refinement of requirements enabled the software to learn more precisely about his design intent, and ultimately become more capable."

The chair is produced via injection moulding, a manufacturing technique that the software was taught about so it would take the constraints of the process into account when coming up with the design.

Autodesk believes that advances in artificial intelligence and generative design tools will improve the work of designers.

"Through a collaborative relationship with artificial intelligence, humans will find their design and engineering expertise amplified, increasing our capacity for innovation and productivity," Autodesk said.

This video was produced by Dezeen for Autodesk, an American software company specialising in 3D engineering and construction software.

In 2017, Autodesk teamed up with What Design Can Do and the IKEA Foundation to launch the Climate Action Challenge, a competition that invited designers to come up with innovative proposals responding to climate change.

Previously, Dezeen teamed up with Autodesk to produce the Future Makers series of videos exploring how new digital tools are transforming the way products are designed and produced.