Generative design tools that produce optimum forms for products and buildings without human intervention are set to transform both the physical world and the role of the designer, according to software experts.

The software can automatically make aircraft lighter, buildings stronger and trainers more comfortable – with the designer acting as a "curator", rather than making all the decisions.

The emerging technology uses algorithms to generate every possible permutation of a design solution. The designer simply enters a set of parameters and then chooses the best outcome generated by the software.

Generative design, which mimics the way organisms evolve in the natural world, was the hot topic at Autodesk University – a three-day technology conference held in Las Vegas last November.

"Generative design is a departure from the way that we have traditionally done design," said Jeff Kowalski, chief technology officer of software company Autodesk. "But these technologies are not a threat, they're more like superpowers."

The digital design method relies on cloud computing to create a multitude options based on a set of fixed parameters. It often produces fluid, lattice-like forms, as the software imitates the way nature creates the most efficient structures possible.

The result can be seen in the cellular midsoles of the trainers – personalised for each runner – that sportswear brand New Balance launched in 2015, and 3D-printing projects by designer Joris Laarman that range from furniture pieces to an entire bridge.

The aesthetic is also visible at the recently completed Elbphilharmonie, the interior of which was acoustically optimised for music performances using the technology.

Generative design is similar to parametric design, which involves the user gradually tweaking spatial parameters until a desired form is reached. It is responsible for some of the futuristic-looking buildings by Zaha Hadid Architects, MAD Architects and more.

But with generative design the parameters are fixed, and the computer quickly builds all the possible solutions for the user to chose from – learning their preferences as it does so.

Architects and designers can specify their desired result – a chair, a floor plan or a facade pattern – along with parameters like materials, manufacturing methods, and cost constraints.

"The computer generates not only the shape, but many, many, many options," said Autodesk strategist Diego Tamburini, who described the method as a "brute-force approach" to design.

Many designers are experimenting with generative design to produce new forms and improve existing products.

"It's exciting to be a designer today, because we have digital tools that allow us to create something incredible," he says during a movie filmed by Dezeen in 2015. "We are interested in exploring the aesthetic consequences of this evolution of technology."

The technology also allowed for the braces to be easily customised to the wearer, and create a product that – with its swooping shape and looks more "fashionable".

Generative design has been around since the early 1990s, and was first used to create simple artwork and animations.

But it is now trickling into a wide range of CAD programmes and therefore becoming accessible to more designers.

The improved processing power of computers and availability of cloud computing – using a network of remote internet servers to store, manage and process data – are also accelerating the uptake.

Generative design platforms currently available include NodeBox, Element and Generate – all of which provide similar tools.

Autodesk is set to launch its own generative design tool Dreamcatcher early this year. It will be integrated into some of the company's current 3D design software programmes, like Fusion 360 and Inventor. 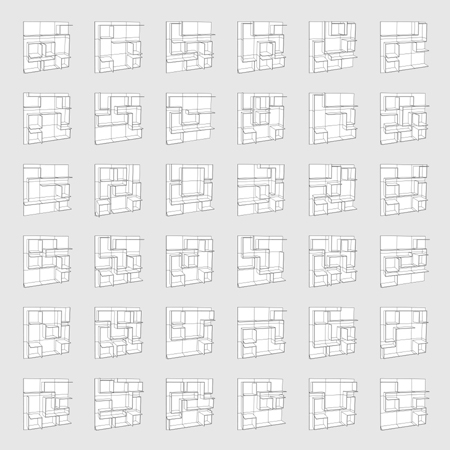 Dreamcatcher was developed to be able to handle a wider variety of parameters than previous generative design tools, and is already being used to configure interiors and even design entire buildings.

"We're taking the success we've now had in creating a system applicable for manufacturing and now trying to apply it to another context in architecture," Kowalski said.

It has been adapted to be able to calculate and map out floor plans with optimum natural light, efficient circulation and layouts based on the different needs of the building's users.

Autodesk is using it to test options for the company's new offices in Toronto before employees move in.

"Each of those things can be evaluated individual basis across those floorpans and scored so that we know which floorpans winds up being the most fair, most equitable, the one that ends up maximising good qualities of the programme," said Kowalski.

He believes that these upgrades will alter the relationship between designer and computer.

"Our role in generative design as a user, as a designer, changes from this directive relationship with the computer – 'here do this, put this line here, make this wall here, make this hole in the part here' – to more of a curator," he added.

"We're relying more on the computer to create and evaluate options concurrently, and show us what the entire solution space looks like, before we commit to one."

Because the software only adds material where necessary, additive manufacturing processes like 3D printing lend themselves to producing the resulting organic forms.

"We are going to see these organic shapes more and more around us," Tamburini told Dezeen, "because those are the shapes that are optimal for light-weighing."

Generative design promises to save time on the design process, save material by creating the most efficient structures and save money by working out the most cost-effective way to manufacture them. But it is not without potential skeptics.

There's a risk that designers will feel threatened by removing a large part of the creative process from their work – simply left to chose between a set of options each time.

Kowalski aimed to assure that generative design will allow designers to push the shapes and functionality of products further than ever before, while Tamburini said that the designer's role will certainly change as the technique becomes more widely adopted.

"What is it that we want to get? What are our boundary conditions? Our operations assumptions? Which is kind of what humans are better at," he added.

With Autodesk's software expected imminently, and many others currently available or on the way, a host of similar innovations can be expected as generative design proliferates.