Hangzhou-based Tsai is showing a modular lighting collection and a range of tables with bases made by bending sheets of flexible steel.

On show at Spazio Quattrocento, in Milan's Zona Tortona district, the products show the designer's material-led approach, but also reflect his desire to combine references to China's heritage with a futuristic vision.

"Older Chinese designers still focus a lot on the past and base their products on pieces from the Ming dynasty or other periods in China's history," he told Dezeen. "But China is changing and we want to make things that represent modern life."

Mario Tsai founded his studio in 2014. He describes it as "a research-oriented design studio whose core function is to explore the potential attributes of materials and new production methods while adhering to sustainable design principles".

The office works across product and installation design, and also offers creative consultancy services to brands in China and Europe. In all of its projects, it seeks to achieve a restrained aesthetic that the designer describes as "soft minimalism".

The works on show for From the Structures include the Mazha lighting system, which is inspired by the cross-shaped structure of the traditional Chinese 'mazha' seat. It comprises a series of modular lighting elements that can be extended indefinitely.

The modules are suspended from thin wires that carry a 12-volt current to the tubular light fittings. Two different configurations are possible, which allows the system to adapt to a variety of spaces.

Also on show is the Gongzheng collection of tables, which are made using simple aluminium profiles that allow for extremely long and strong surfaces to be produced.

Legs and cross braces shaped like the I-beams used in construction provide a stable base for tabletops that can be specified in various widths, thanks to an intelligent system of interlocking panels.

The use of aluminium profiles with a hollow structure means the tables are remarkably lightweight, whilst ensuring adequate strength and stability.

Finally, Tsai is exhibiting the Press tables, which utilise the elastic properties of stainless steel sheets to create a base that supports a thick steel-plate top.

The three pieces of steel are bent into shape and fixed together using screw fittings. The tabletop is then attached to a central ring using suction cups.

This is the second year running that Mario Tsai Studio has exhibited in Milan, following on from a much smaller presentation last year at the Salone Satellite event in Rho Fiera.

According to Tsai, exhibiting in Milan offers an opportunity to showcase the capabilities of Chinese design to new markets. 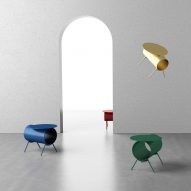 "A lot of media come to Milan this week and it is a very good opportunity for networking," said the designer, who added that the expense of travelling from China meant it was a decision that was not made lightly.

"We missed the chance to ship the pieces here on a boat so we had to pay a lot more to send them on a plane," he said. "It is very expensive to do this."

Earlier this year, Tsai was chosen as one of six young Chinese designers whose work was showcased at part of Maison&Objet's Rising Talent Awards.

He claimed that plenty of young designers in China are finding work as a result of the country's booming economy, and suggested that there is a significant shift happening at the moment, as established manufacturing companies seek to use design to grow their business.

"A lot of manufacturers in China want to make the transition to become a lifestyle brand," Tsai explained.

"They have the factories and know how to produce things but they want to work with designers to help develop a brand. This is a great opportunity and we are helping some of these companies through our consultancy."

Tsai's previous projects have included a pair of tables with handles that allow them to be moved around easily, and a collection of wall-mounted shelves designed for Danish brand Ferm Living that appear to be mounted without the use of any fixtures.