Chunks of "plastiglomerate" found by Canadian artist Kelly Jazvac on a Hawaiian beach form part of this year's Milan Triennale exhibition, illustrating how the anthropocene era is leading to the formation of new man-made minerals.

The hybrid material is the result of plastic items washed up on the shore fusing with shells, sand and other natural materials when burnt in campfires lit on the beach.

The ready-made artworks are presented as a marker of the anthropocene, a proposed new geological era where human impact has become the dominant force on the earth's geology.

"The heavier fragments could potentially be preserved in the sediment record, leaving a permanent human-made mark in the Earth's stratiography," reads the exhibition text, which describes the objects as "fossils of the future".

"I think it is important to show them because of the warning signs they indicate and the curiosity they generate," Jazvac told Dezeen. "I find them beautiful and horrific at the same time."

The objects are on display as part of Broken Nature: Design Takes On Human Survival, the exhibition that forms the XXII International Exhibition of La Triennale di Milano in Milan, Italy.

Curated by Paola Antonelli, the exhibition seeks to examine humankind's fractured relationship with the natural world and its resources, as well as what can be done to reverse the damage.

The exhibition is "about design that has to do with the environment, with wasting less, with recycling more, with repairing things better and also with connecting to other human beings and to other species better," Antonelli said in an interview with Dezeen.

"I do believe that we will become extinct," Antonelli added. "I believe that our best chance is to design our own really elegant extension, so that we will leave a legacy that means something, and remains, in the future."

Chunks of plastiglomerate were first discovered in 2006 by oceanographer Charles Moore on Kamilo Beach, a polluted area of sand in Hawaii, but at that point the material had no name.

The name plastiglomerate was attributed to the material by Jazvac, Moore and Patricia Corcoran, an earth scientist at Western University in Ontario, Canada, who are all interested in plastic pollution and its effects on the environment.

"I'm interested in how [the pieces of plastiglomerate] act as both scientific and cultural evidence of environmental contamination, and the ways in which they physically embody cycles of production, consumption, and disposal," said Jazvac.

"It's the story of a whole system captured in a not-so-natural stone. A long-lasting stone that will be a part of the earth's future."

Born in 1980 and based in London, Ontario, Jasvac's sculptures and installations often express environmental themes.

She hopes that by exhibiting the plastiglomerate objects, visitors will reflect on the conditions that led to their existence.

"When shown in this way, as artworks and artefacts, I think they will prompt viewers to ask important questions about all the conditions and processes that led to their existence," she said.

"Some evidence of environmental damage is so horrible that it can be very hard for people to consider it carefully," said Jazvac.

"I hope these objects can act as a bridge, and fight harmful delusions about environmental contamination and climate change." 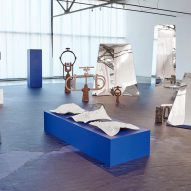 Other projects exploring the anthropocene era include three household objects by Yesenia Thibault-Picazo and an installation that explores the effects of chemical waste dumping by Xandra van der Eijk.