Originally two separate houses connected by rammed earth party-walls, the house is made up of two narrow rectangular plots that measure around five metres wide and between 15 and 30 metres in length.

Located in a village outside the city of Lleida, in Spain's northeastern Catalonia region, the architects said that the building is typical of the area.

The architects were asked to update and adapt the three-storey property for the family's needs.

They began by removing floors to create new double-height spaces and light-filled courtyards within the building.

These include a double-height living room and glass-roofed terrace area, a second living-area that spans the lower-ground and ground floor, and an indoor courtyard on the first floor.

"The main approach of the project was to empty the existing building in a selective way in order to attain the project aims and provide for the functional needs of the clients," said Hiha Studio.

"These voids allowed for the elimination of existing elements and for a reduction in the amount of surface that required remodelling and thereby provide economic savings for the client."

On the first-floor landing-area the architects inserted a series of six vertical openings which overlook the double-height living room below.

The new double-height spaces, openings and courtyards allow light to filter through into all areas of the house while also creating new sight lines between rooms.

"The decision to place the empty spaces in contact with the north and south facades allowed us to obtain a greater contact surface with the exterior and to generate a more compact building," said the Barcelona studio.

"This reduced depth allowed us to extend the light from the facade to the centre of the house."

To make the newly formed rooms feel cosy despite their lofty proportions, the architects ensured that each one was a social space used for gathering around the hearth or dining.

They are also overlooked by walkways and stairwells or openly connected to other rooms, such as the double-height living room and sheltered terrace which connect to the kitchen.

"These spaces are visual connectors even though they are set at different levels," said Hiha Studio. "In them, everyday activities are carried out whereas the rooms of a more private nature are located around these rooms."

The house is entered from the lower-ground floor, where the studio created what it refers to as a "Roman Fauces" entrance, in tribute to the large entrance halls of the farmhouses and other traditional houses in the town.

Daytime activities are concentrated on the ground floor, with the living room, kitchen and dining room linked to the sheltered terrace and bathroom. The first floor is given over to bedrooms and bathrooms.

During the renovation, the architects stripped the house back to its bones, removing all ornamentation and finishes prior to remodelling and returning it to its original appearance. 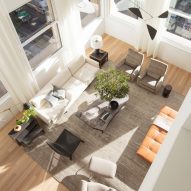 "Our aim was to recover the essence of this type of house, where the material, the texture and the colour are given additional value and incorporated within the new interior language," said the studio.

"The rammed earth walls take on a prominent technical role in this new language since these walls allow us to regulate the natural moisture, temperature and acoustics of the interior of the house."

In Montreal, Canada, Atelier Pierre Thibault added a light-filled double-height living room to an ageing home, creating a connection to the back yard through tall glass doors, where an outdoor dining space is located.

Photography is by Pol Viladoms.