Atelier Pierre Thibault has created an addition to a 1950s residence in Canada, providing its occupants with a new living room, studio, and garage.

The two-storey property, name Les Complices, is located just outside Montreal in the residential area of St-Lambert. The home's owners gradually outgrew it over the years, and tasked Atelier Pierre Thibault with creating an addition that would provide more living space and a garage.

"A tall volume is annexed to the home, taking maximum advantage of the leftover space between the existing building and the property's setback," said Atelier Pierre Thibault.

From the street, the new volume is slightly shorter than the existing home, and is clad in dark brick that complements the original facade. "Although it is thoroughly contemporary, the architectural approach harmonises with the character of the previous construction," the firm said in a project description.

In plan, the new volume is split in two, which allows more light to enter from the sides and creates a sheltered patio that is accessible from the kitchen.

"The annex is broken up, which opens at its centre an interior courtyard that forms a secret terrace and maximises natural light indoors," said Atelier Pierre Thibault.

The portion at the front of the home contains a garage on the ground level, and a small room upstairs that can be used as a studio or home office. This space has a small terrace carved out of the main volume overlooking the street. 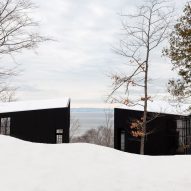 At the back, the extension contains a double-height living room. This light-filled space opens to the back yard through tall glass doors, where an outdoor dining space is located.

The studio also renovated the interiors, matching the existing building's floors, walls and ceilings to the palette of the extension. Pale wooden finishes and minimalist furniture give the older home a cohesive feel with the addition.

Atelier Pierre Thibault was set up by its namesake founder in 1988. Other projects by the studio – which has offices in Quebec City and Montreal – include a geometric white house in the forest, and a rural retreat that is shared by two brothers and their families. 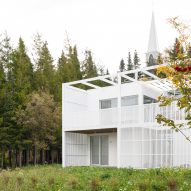