A team of student designers and engineers from the RCA and Imperial College have designed an open-source alternative to GPS, called Aweigh, that does not rely on satellites.

Instead, the device calculates a user's position using the sun – a feature inspired by the polarised vision of insects.

Its student makers said that the design is similar to that of the sextant, one of the oldest known navigating tools that measures the angular distance between two visible objects, in this case the horizon and the sun.

They said that Aweigh can even work on a cloudy day when the sun is not in view, and unlike devices that use satellites, such as smartphones, Aweigh functions offline so a user's positional data cannot be leaked through the internet.

"Satellites send information which can be intercepted and interfered with, but to interfere with Aweigh, one would need to artificially move the sun," explained the team of four, made up of States Lee, Samuel Iliffe, Flora Weil and Keren Zhang.

"If one of the devices is faulty or broken, it is only that user who suffers. If one satellite is faulty, then the consequences can affect millions of users.

"Most people don't think about the way they navigate," the group continued, "but as concerns over centralised technology and data privacy increase, individuals should have a choice over how their data is taken and used. Aweigh is about giving back choice."

Describing the system as "a set of tools and blueprints", the team wanted users to be able to hack or fix the tools they use, so making the project open-source was important.

The device's custom circuit-board that reads light values to find the sun, is powered by Raspberry Pi, a tiny computer that is specifically designed to educate users about coding.

The circuit board can be modified to customise interactions and the team imagine the device could work with older navigation tools like maps, and satellite navigation tools, by replacing the GPS chip.

A booklet explaining how the device works is included in the pack, and the group hope that coders will collaborate on the project to improve it.

"One variation of this device is simply a list of commercially available parts to buy, and an electronics diagram," they said.

"A group of beta testers made their own casings for the device, examples range from hiding the device in a camera to casing it in a plumber's pipe, because the pipe is another piece of design which is obvious to use and fixable."

The team is currently working on increasing the resolution, whilst the details for building the device yourself (including a pdf of the book) are available to download.

"We believe that this project is particularly contemporary, given how design is shifting towards more science-focused work and given how beholden UK citizens currently are to foreign satellite systems," Flora Weil told Dezeen.

"We also believe that the values of this project are important to shift current trends in technological progress towards more democratic motives." 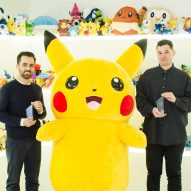 The project has been launched at a time when the Royal College of Art has announced plans to expand its science and technology programme, and revealed that student applications from within the European Union have risen in the past year.