Designed to resemble a futuristic research and development lab environment, the store is tailored to sports enthusiasts who want to try out sportswear and equipment in simulated environments before buying them.

Singapore studio Ministry of Design was invited to create the interior and graphics for the sports store, which is located within Jewel Changi Airport, designed by Safdie Architects.

Called Durasport, the store is designed to attract ultra-performance athletes and sporting enthusiasts, which the architects said is "a growing but relatively untapped market segment".

"Durasport is the second store we've designed for our client Durasafe," the studio explained.

"The question we asked is: 'How do we make a brick and mortar sports store relevant in the 21st century?'"

These zones allow cyclists, skiers, climbers and triathletes to sample and test the high performance sportswear and equipment before they purchase them, and is facilitated by five simulators. 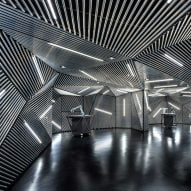 These include a ski simulator, an indoor climbing-wall with a rotating surface, a Magic Mirror that allows customers to virtually try on ski clothing, a swim bench for testing the flexibility of wetsuits, and cycling trainer rollers, which can simulate various slope gradients and cycling experiences.

For the store's primary spatial material, the designers opted to use high-grade stainless steel, which has been used to create the shopfront, wall panels, logo signage and product displays.

The studio said that the material is an intentional reference to the typical laboratory environment in which the store's high-performance products would have been developed.

A customised flexible display-system made up of shelves, racks or holders that clip in and out of notched display walls and incorporate an integrated LED lighting system, allows the brand to showcase its varied merchandise.

The facade is made up of a steel frame with a chevron pattern that is designed to point towards the central entrance, conveying a sense of motion, whilst the logo is based on an X.

"We adopted an X symbol for the logo, to represent the catalyst at the beginning of any experiment, reminiscent of the two arrows coming together like an X at the store entrance," explained the designers.

Products sold within the store were co-curated by Ministry Of Design and the client, and include the world's first graphene bicycle by UK company Dassi, the world's lightest folding bicycle by fellow UK company Hummingbird, and heat-mouldable customised cycling shoes by Italian brand DL Killer.

For skiers there are adjustable alpine ski boots by Italian company Dynafit that provide flexibility for scaling uphill slopes and rigidity for downhill skiing, while swimmers can test out a modified snorkel or power breather by German brand Ameo, which enhances lap times.

Opened this month, Safdie Architects' Jewel Changi Airport also features an indoor forest that sits under a large glazed dome with the world's tallest indoor waterfall running through the middle.

The glass bagel-shaped building is connected to the city's transport systems and directly to airport terminal one, as well as terminals two and three via pedestrian bridges. It has five stories above ground and five more below.