Architect Frank Gehry has designed a pair of office buildings for Warner Bros Entertainment in Los Angeles, to resemble "icebergs floating along the freeway".

The Canadian-American architect hopes the project will "recapture that feeling of old Hollywood splendour" that existed during its early years.

"Once upon a time, Hollywood Studios had an important architectural presence in the city – they were like monuments to the movie-making process," said Gehry.

Nicknamed Second Century Project, the complex will be erected opposite Warner Bros headquarters on the other side of the Ventura Freeway. It will comprise two huge office buildings broken up into stepped, staggered and slanted fragments, and fronted by glass.

"From the freeway, the buildings are composed as one long sculptural glass facade that creates a single identity like icebergs floating along the freeway," said Gehry.

A terraced, punched-metal facade will run along the rear of the building and is intended to reference the scale and aesthetic of the existing studio buildings.

While they appear disjointed from the exterior, inside they will be designed to offer large, open workspaces. 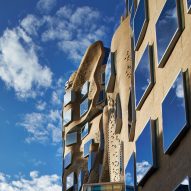 As part of this, Warner Bros will also purchase the The Burbank Studios property – located next to the plot of the new build – from Worthe Real Estate Group and Stockbridge Real Estate. The building will provide the company with additional production office space, eight sound stages, a mill building and a commissary.

Construction of the Second Century Project is slated for completion in 2023 – coinciding with Warner Bros' centennial celebration.

Gehry, who was awarded the Pritzker Prize in 1989, has enjoyed an architectural career that spans seven decades. During this time, he has developed a flair for sculptural architecture – ranging from the "paper bag" University of Technology building in Sydney to the aluminium-clad Luma Arles Tower in France, which is set to open next year.

Aaron Betsky celebrated the architect's "unending thirst for new work, new ideas, new forms" in an Opinion column to coincide with his 90th birthday this year.

Renderings are by Sora, courtesy of Gehry Partners.