Layer has teamed up with Chinese automotive company Nio to design an electric scooter that uses artificial intelligence and machine-learning technology to autonomously take you on your preferred routes.

The smart scooter, called Pal, is a "near-future concept" that aims to alleviate the growing issue of congestion in cities by offering flexible and convenient last-mile travel.

Described by Layer as a "mobile platform", the Pal scooter uses Nio's intelligent AI system called Nomi to become accustomed to the driver's routes over time, eventually being able to autonomously take them to their destination.

A modular, electric battery powers the scooter, which can be recharged in the trunk of any Nio vehicle or at the user's home.

If the journey requires more charge than a single battery offers, however, it can be swiftly swapped out for another.

Controlled via a wireless bluetooth earpiece, Pal can connect to the AI Nomi system via an app on the user's smartwatch or phone.

From here, it is able to respond to simple voice commands and questions from the user, such as asking it to take them to work, what the best route is, or how much battery is left in the vehicle.

"At Layer, we believe that the future is autonomous and sustainable, and it is important to create products that offer more convenience without inconveniencing the planet," said Layer founder Benjamin Hubert.

"Pal is a near-future concept for a nimble 'last-mile' electric vehicle that addresses the growing congestion and population density of our cities and offers a possible solution to these challenges," he added.

The scooter also boasts pressure-sensitive suspension for "lean steering", enabling the driver to lean forward to increase the speed, back to decrease speed, and to curve left or right to turn.

Each wheel is powered by an individual motor embedded in the hub to allow for independent "wheel speed" steering, which varies the wheel speed in order to turn the vehicle.

The chassis and steering column are made from graphene-coated carbon fibre, making the vehicle both strong and lightweight, and in turn easy to transport, as well as being more efficient in terms of energy usage.

Designed to fit in the boot of a small car, users can fold the scooter down into a more compact size to allow for easy transportation. 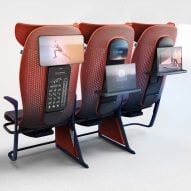 Various accessories, such as a bag, basket or shopping cart, can also be fixed to the front of the steering column to adapt to the user's needs.

"The vehicle has been designed to express lifestyle values and sensibilities, rather than with an overtly tech-driven language, creating harmony between the way people think about their home and transport in the future," said Hubert.

The Pal scooter was showcased at the Wallpaper* Handmade exhibition during this year's Milan design week, which took place from 9 to 14 April.

This is not the first time Layer have delved into transport design. The studio recently developed a smart textile for use in Airbus' economy class seating that allows passengers to monitor and control their seat conditions using their phone.