A former nunnery in Milan's city centre is now home to The Sister Hotel, which architecture studio Quincoces-Dragò has completed with eclectic interiors.

Occupying a 16th-century building that once served as a convent, The Sister Hotel has been decadently dressed with a mix of old and new furnishings to evoke a "timeless atmosphere".

Its name is a playful nod to the site's past, with the word sister often used to describe a female member of a religious order.

The hotel is the latest addition to Six – a multidisciplinary group of spaces launched by entrepreneur Mauro Orlandelli that comprises of the SixGallery, Sixième bistro and materials studio Forest Design.

"The prevailing style is an eclectic mix of sophisticated furnishings, timeless romantic details and contemporary elements, which together give a welcoming and refined atmosphere," said Samuele Savio, art director of Six.

When it came to designing the hotel's nine guest rooms and communal spaces, Orlandelli approached architects David Lopez Quincoces and Fanny Bauer Grung – heads of studio Quincoces-Dragò and curators of exhibitions at SixGallery.

They aimed to channel an aesthetic akin to a hôtel particulier, the French term used to describe grandiose private townhouses.

"The idea of hospitality for The Sister Hotel was born from this, the desire to offer an experience in a sophisticated but informal environment, a bohemian oasis where design, art and food come together," the group explained. 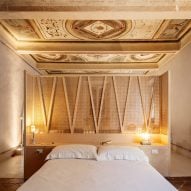 Eight Italian hotels to wind down in

Walls in the bedrooms have been painted moody shades like navy blue and moss green. Interest is added by a selection of vintage furnishings taken from the gallery, like orange velvet sofas and timber screen dividers.

Natural light filters in from tall french doors, which open up onto small balconies.

Forest Design completed the floors throughout the space, opting for wood parquet in the sleeping quarters and red and black terrazzo in the corridors – colours that the design team felt represented Milan as a city.

Although The Sister Hotel won't open until September 2019, one of the rooms was previewed to the public at this year's Milan design week.