Italian designer Gaetano Pesce has accused feminist protesters of misinterpreting Up, his iconic armchair that depicts a woman as a prisoner, and defended the use of plastic in design products.

Pesce, 79, spoke to Dezeen in Milan after an installation celebrating the 50th anniversary of Up was attacked by protesters.

"I believe these feminists have not read nor understood the meaning of my work in Milan," he told Dezeen. "Generally speaking, when two entities fight for the same objective, they cooperate."

He added that rising opposition to plastics, such as the polyurethane foam used to make Up, is "stupid". He said: "Synthetic materials produced and generated significant progress and I believe we can't do without them."

Feminist group Non Una Di Meno staged the demonstration during Milan design week, after an eight-metre high version of the Up5 armchair and Up6 footstool were installed in Piazza del Duomo in the city centre.

The chair and ottoman are attached by a chain, in a deliberate reference to "a female-shaped body with the prisoner's ball chained to its foot". But Pesce said protesters are wrong to see this as a symbol of women's oppression.

Furniture brand B&B Italia was behind the installation, which was on show for the duration of Milan design week. Called Maestà Sofferente – Suffering Majesty – the flesh-coloured installation conceived by Pesce was pierced by 400 arrows and flanked on either side by the heads of wild animals.

During its installation, artist Cristina Donati Meyer threw red varnish onto the seat of the chair. The protesters claimed Pesce's design reduces a woman to a piece of furniture, according to a statement on the group's Facebook page.

"In fact, I think these people were seeking easy publicity, since they haven't been able to achieve it through their own actions," Pesce said.

"In particular, I heard about a female so-called artist who sprayed red paint on my chair. I believe this person doesn't deserve the title of artist."

Pesce originally designed the Up series in 1969 for C&B, the precursor to B&B Italia, which still manufactures the chair. He said he was behind the "important discovery" that the expanded polyurethane chairs could be vacuum-packed, allowing for convenient packaging.

In return, he claims the brand gave him permission to "have one of the chairs express a political content".

The aim of the ball and chain symbolism in the Up5 was to express the idea that women are "prisoners of their own making".

"As you know very well, my design raises debates which help people to advance, discovering new values and possibly letting go of the old ones," he said.

Pesce's Up series consists of seven pieces of furniture, all of which fill with air and inflate without the need for a mechanical device. The items are upholstered in an elastic synthetic jersey material.

"The series was born from thinking about the nature of a sponge," said Pesce. "As you know, the sponge is made of 80 per cent air and 20 per cent matter. Thinking about this and soft, expanded polyurethane, which back then was a new material, I got the idea to create a series of chairs with no internal structure." 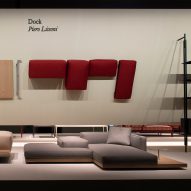 "We can't do without" synthetic materials

The interior structure continues to be produced from expanded polyurethane, and Pesce defended the use of the fossil-fuel plastic.

"I think there are many misunderstandings about this topic," he said when asked about the backlash against plastic pollution. "Synthetic materials produced and generated significant progress and I believe we can't do without them."

"Today's political correctness, in my opinion, is stupid," he continued. "If in the past we had believed that electricity was dangerous. Today the world would be dark and progress would have stopped then. I believe it's time to educate the idiots in order to allow the thinkers to move forward and push the world."

Pesce also criticised design education and said that it's "the fault of the school system" that similarly radical chairs are not being produced today.

"In my opinion, the future of design doesn't have any alternative but to continue on the path I chose more than 50 years ago," he said.

Not enough radical thinking in schools

"Beautiful forms, refined details and everything else related to a formal tradition do not express anything more than the designers of a century ago," he continued.

"Today, design is an art and because of that must express not only practical content, but also content related to a political, religious, philosophical and existential reality."

The designer suggested that institutions require a radical shake-up to allow students to express themselves and the world around them better through design, starting with the sacking of backward-looking staff.

"Schools should fire conservative teachers and allow the students to express what they feel inside rather than trivial formal or decorative values," he added.

The first Italian product "with a political meaning"

A press release announcing the installation claimed the Up armchair was "the first product of Italian design with a political meaning."

The product was ahead of its time both for the way it was sold in vacuum-packed form, and for the way it depicted "the woman as prisoner," according to the release.

"It came as a flat transparent PVC disk, free of air, to find its shapes only once opened," it said. "A happening in the living room, a performance at home."

Its political message was also radical, the release said. "She was certainly a male prisoner, who was forced to live behind the scenes, except for some lonely exception, certainly not holding important roles in any aspect of life (political, economic, social etc)."

Born in La Spezia in Italy in 1939, Pesce has worked across architecture, interiors and design. Other design projects include a pair of plastic shoes for Brazilian brand Melissa and a set of 61 tables that together make up a map of Italy.

The anniversary celebration of the Up chair formed part of a bumper year in Milan for B&B Italia. Under the umbrella of new furniture and lighting group Design Holding, along with Flos and Louis Poulsen, it participated in the biggest stand the Salone del Mobile has seen in decades.

Other installations at this year's Milan design week included an apartment that showed how to best use tiles in a domestic environment, geometric totem poles that demonstrated Tarkett's closed-loop material IQ Surface and Pezo von Ellrichshausen's mirrored pavilion.