Note Design Studio has installed geometric totem poles inside a historic Milanese building to showcase the potential of IQ Surface, a new material by Tarkett that can be continuously recycled.

Located in Circolo Filologico for the duration of Milan design week, Formations is an exhibition of the latest product from vinyl flooring manufacturer Tarkett.

IQ Surface is a durable material that can cover angular and curved forms. It is produced using recycled materials, and can be recycled by Tarkett when it is no longer in use.

Stockholm-based Note Design Studio worked with the brand to design the colours and patterns of the material, and then designed the Milan installation to show some of the many ways it can be used.

The result is a room filled with 24 towering columns, featuring colourful speckled surfaces and topped with an assortment of 3D shapes.

According to Note Design Studio co-founder Cristiano Pigazzini, the aim was to "trigger emotions and create that gut punch of an experience".

"We searched for the contrast between the simple and the complicated, the exclusive and the affordable, the natural and constructed," he said.

The 24 columns are arranged beneath a glass roof, in a double-height space at the centre of the building, which is a former research institute built in the late 19th century.

"We started with the idea of of a sculpture park," explained Johannes Carlström, Note Design Studio's other founder. "We wanted to create shapes that work with the room and the light."

IQ Surface has also been used elsewhere in the building. There are a series of meeting spaces decorated with the material, while on the first floor, in the former library,  there is a large table covered in geometric 3D shapes.

"The main installation is designed to be bombastic – we wanted visitors to be able to experience it with their own bodies, to walk through it and touch it," added Carlström.

"But we also wanted to have something at smaller scale, so you see the more detailed stuff and maybe look a little bit more closely."

IQ Surface is produced at Tarkett's factory in Ronneby, Sweden. It is currently made from 25 per cent recycled materials, although the long-term aim is to deliver a closed-loop system – a key component of the circular economy – that allows the material used in products to be endlessly recycled. 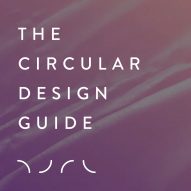 To source materials for recycling, the brand is trialling a programme that sees it reclaim post-use Tarkett flooring.

Using an innovative method, the factory workers are able to remove glue and residues from the material, then turn it into a new high-quality surface. They are even able to separate out different colours.

"We are deeply convinced that there is an urgency to shift models to preserve the world's finite natural resources and capital," said Myriam Tryjefaczka, director of sustainability for Tarkett.

"Hence our commitment to develop a circular economy, in which materials are reused," she continued. "To that end, integrating recycled materials instead of virgin materials is a core part of that approach."

The brand hopes eventually to be able to recycle vinyl flooring manufactured by other companies too.

"Vinyl is one of the polymers that are best-suited for recycling since it maintains its original properties for several cycles," added Tryjefaczka. "This means that IQ Surface material installed today can be taken back and reused in the future."

Formations is on show at Circolo Filologico until 14 April, as part of Milan design week. It is furnished with products by Magis.

It is the latest of several installations that Note Design Studio and Tarkett have produced together.

Their first collaboration was The Lookout, an installation at the Stockholm Furniture Fair in 2018, which was named best stand at the show and also won the Small Interior of the Year 2018 prize at Dezeen Awards.

More recently, the pair created an installation designed to look like snow dunes.