Prada has released a collection of bags envisioned by female architects, including a looping design by SANAA founder Kazuyo Sejima and a pair by Elizabeth Diller that "flirt" between luggage and garments.

The collaboration, which is called Prada Invites, tasked each to create products from Prada's black nylon.

Diller, a partner at New York Diller Scofidio + Renfro, designed two prototype items from the fabric: The Envelope and The Yoke. Each is intended to merge the functions of a bag and clothing.

"The distinction between garments and accessories has always seemed odd to me," said Diller.

"Why are they considered, displayed and sold as two separate categories in two parts of the store? I love when the two have a bit more room to flirt and cross-pollinate," she continued. "Can luggage be worn? I'd like to change that paradigm."

The Envelope aims to transforms the traditional garment bag into a raincoat, to protect clothing while on the move.

The coat comprises a curved top and thick metal zips to slip clothing inside. Two buckles, placed on the front and back, can be used to cinch it in at the waste when worn as a coat.

The Yoke, meanwhile, features similar detailing, and either be used as a backpack, or folded up into a clutch bag.

To suit these two purposes, the item is cut into a U-shape comprising two small zip-bags and one larger one. The pockets are intended for carrying a range of items like "sketchpads, sandwiches and lipstick", according to Diller Scofidio + Renfro. 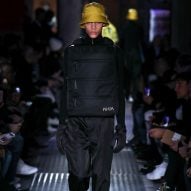 When worn as a backpack, the two mini pockets rest in front of the shoulders and are joined by a buckle. The longer pocket sits on the back. The wearer can then fold The Yoke in half and use the buckle strap as a handle.

Sejima's bag similarly loops around the shoulders, with two large, detachable zip pockets at each end. The user can take these extra pockets off and carry the bag with a pair of handles coloured blue and pink.

The Japanese architect also designed a set of playful pockets to added extra details to the bag. These come in various hues like yellow and white, and different shapes.

The 2019 Prada Invites collaboration follows on from the 2018 edition, in which architects Rem Koolhaas, Jacques Herzog and Pierre de Meuron, and designers Konstantin Grcic, and Ronan and Erwan Bouroullec all contributed pieces to the brand's Autumn Winter menswear collection.

This year the brand picked leading female architects to contribute to its womenswear.

Diller and her New York firm, which she co-founded in 1981, has completed a number of large-scale projects in recent years, such as the High Line, The Shed and an 88-storey skyscraper at Hudson Yards.

Diller has also been recognised in her own right. Earlier this year, she was named as the winner of the Jane Drew Prize for women in architecture and in 2018 she was listed as the only architect on the Time 100 list.

Sejima founded her firm SANAA with her partner Ryue Nishizawa in 1995. The two were awarded the Pritzker Prize – the architecture profession's highest accolade – in 2010.

SANAA has a number of well-known works in its portfolio, including the New Museum in New York and the Grace Farms Nature Reserve in Connecticut.

Boeri, who was born in 1924, established her eponymous firm in Milan in 1963 after working with celebrated Italian architect and designers Gio Pont and Marco Zanuso.

The firm works across the fields of architecture, interior design and industrial design, with projects including an apartment in Trump Tower, showrooms for furniture brand Knoll, and designs for lighting company Artemide.

Boeri's son, Stefano, is also a well-regarded architect in his own right. He is best-known for his plant-covered architecture, which include two towers in Milan, called Bosco Verticale, or Vertical Forest, as well as proposals for Albania, China and Mars.