The 910-foot-tall (277-metre) apartment tower at 15 Hudson Yards is the latest to complete at the vast site on the West Side, set to become a hub of commercial, cultural and residential activity.

Diller Scofidio + Renfro (DS+R) designed the towering, curtain-wall skyscraper with Rockwell Group, which was in charge of the interiors.

Speaking to Dezeen at the project's unveiling on 16 January 2019, architect Elizabeth Diller said 15 Hudson Yards marked a major step for her and the firm.

"It was really, really difficult for me, from typical work [like cultural buildings and institutions]," she said. "We have never done a tower or anything above 14 storeys."

"We thought, this is not in our wheelhouse, but let's do it," she said. "It's a challenge to work in another mode, for a different type of client, and do something that makes us a little uncomfortable."

Plans for the residential building were drawn up well-after DS+R and Rockwell Group had started designing cultural complex The Shed together in 2008, and so they used the earlier project to inform the design.

The two buildings are nested together and share 15 Hudson Yards' service and freight elevators.

"We decided it could really be an advantage to do both," Diller told Dezeen. "When you have a neighbour that's unfriendly, then you don't know [what will happen]. We wanted to have a good building next door to us."

"We were able to work back and forth and negotiate back and forth, to make both buildings better," she continued. "But they're still separate."

Overlooking the Hudson River, 15 Hudson Yards has a rigid, rectangular base that gradually rises and morphs to form a cloverleaf-shaped top portion. This shape is designed to maximise views for its upper residences.

Inside, the building has over 200 private residences, ranging from two- to four-bedroom homes. Rockwell Group chose walnut, travertine and limestone surfaces to feature throughout.

Amenities are located midway up the building on the 50th and 51st floors, providing views of the river, New York City and New Jersey. They includes an indoor swimming pool, a gym, spa, movie theatre, private dining room, lounge and other communal areas.

Hudson Yards is the largest private real-estate development in the US, spanning 28 acres (11 hectares) with 14 additional acres (5 hectares) of open space, and covering seven city blocks in total.

The complex is developed by Related Companies with Oxford Properties as a major equity partner, and masterplanned by architecture firm Kohn Pedersen Fox (KPF). 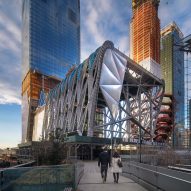 "Architects and urbanists have to be very vigilant about the city, and how it becomes privatised," said Diller. "I think this site is an exception, in many ways, regarding developers that are just sprouting over Manhattan, because it is planned."

"If there was ever a place to build, this was the place," said the architect. "New York is a real-estate oriented city, love it or not."

"It was an engineering feat, a real tour de force. So when that happened, the opportunity to develop enabled this whole project, which is like changing the centre of gravity."

DS+R is based in the neighbourhood, and has been involved with the redevelopment of Chelsea and the West Side for over a decade, starting with the elevated park the High Line in 2008.

The firm is primarily known for its cultural and public sites, with current projects including the overhaul of New York's MoMA and a proposed outpost for London's V&A Museum.

In a 2016 interview with Dezeen, Diller recounted her uneasiness about super-tall skyscrapers in New York City, how they "damage the city fabric".

She still holds this opinion, but believes that "Hudson Yards is a unique exception."

More Hudson Yards structures are set to open over the coming months, including The Shed – poised to launch 5 April 2019 – and Thomas Heatherwick's Vessel, which is planned for unveiling on 15 March 2019.

Photography is by Timothy Schenck, courtesy of Related and Oxford, unless stated otherwise. 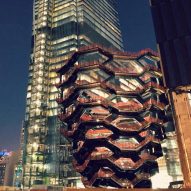