New York firms Diller Scofidio + Renfro and Rockwell Group have completed The Shed, a cultural centre in Manhattan's Hudson Yards, featuring a retractable roof that can be moved to form a performance area.

Measuring 200,00 square feet (18,500 square metres), The Shed is a new venue for art-goers located on the northern edge of Chelsea in New York City, forming part of the city's major Hudson Yards development.

The Shed's Bloomberg Building was designed by Diller Scofidio + Renfro (DSR), with Rockwell Group as collaborating architect. It features a U-shaped, moving roof that virtually doubles the size of the art complex.

The building is intended to be flexible and can physically transform itself, based on the needs and requests of artists using the space.

"The building had to be flexible, so flexible that it could even change in size, on demand," DSR co-founder Elizabeth Diller told a group of journalists at The Shed's opening on 3 April 2019. "But it had to be flexible without defaulting to the generic, and that's very very important," said Diller.

"A new group of artists will come in and find new ways of using the building that we didn't imagine," Diller said later to Dezeen. "As artists start to use it, they'll kick it [the design] around, and find all sorts of different things to do."

The structure also had to house various types of arts under one roof.

"The arts in New York are siloed: visual arts, performing arts, dance, theatre, music," she said. "That is not how artists think today. But what about tomorrow. How are artists going to be thinking in a decade, two decades, or three decades? The only answer is we cannot know." 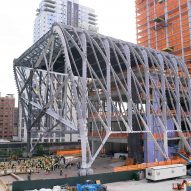 Described as a "telescoping outer shell", the moveable roof extends away from the main building on bogie wheels to creates a multi-use event space in the adjoining plaza called The McCourt that spans 11,700 square feet (1,087 square metres).

"In my mind, I hope, this [The Shed] is a perpetual work-in-progress," said Diller. "That is, it's always getting smarter, always getting more agile. "

"This building will respond, in real time, to the challenges brought on by artists, and hopefully, it will challenge artists back," she added.

The Shed's moveable shell is made with an exposed steel diagrid frame, covered in translucent ethylene tetrafluoroethylene (EFTE) panels. This lightweight, durable material also has the thermal properties of insulating glass, at a fraction of the weight.

The McCourt has radiant floors and black shades that can roll across the EFTE panels to darken the interiors and dampen sound.

"There's no back of house and front of house," said Diller.  "It's all just a big space for the audience, for the tech folks, for the performers alike, all in one space."

When the moveable shell is nested over the fixed building, the area acts as an outdoor plaza.

The Shed is founded by a team of partners, with designers, industry leaders, businessmen and innovators. The chair is Daniel Doctoroff, who worked closely with the architectural team, as well as Alex Poots, The Shed's chief executive officer and artistic director. 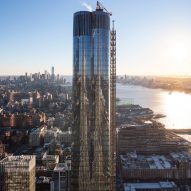 The main entrance for The Shed is on the north side of West 30th Street, and includes a lobby, bookstore and an eatery called Cedric's. A second entrance is located closer to The Vessel and Hudson Yards' plaza.

Inside, galleries are column-free and feature glass curtain walls with floors and ceilings also supported by thick wires. An upper portion features glass operable walls that can fold fully open to join The McCourt.

On level six is a sound-isolated black box space, called Griffin theatre, where another glass wall also offers views to The McCourt. Here, will be a showing of The Shed's inaugural play, Norma Jeane Baker of Troy starring Ben Whishaw and Renee Fleming.

One of The Shed's opening commissions in its lower level gallery is Reich Richter Pärt, and features moments designed by visual artist Gerhard Richter with composers Arvo Pärt with Steve Reich.

Completing The Shed is a top floor that accommodates an event space with a large glass wall and two skylights. Next door is a rehearsal space and a creative lab for local artists.

The Shed is positioned at the end of the elevated High Line park, which Diller Scofidio + Renfro designed with landscape firm James Corner Field Operations.

Diller pitched the idea for The Shed 11 years ago, following the completion of High Line, and in response to a request for proposal issued by the city and former mayor Michael Bloomberg.

At the time, the area was undeveloped and housed industry and railroad tracks. It was to be set aside by the city for a cultural project, and to span 20,000 square feet (1, 858 square metres) of land at the yard.

Bloomberg accepted the team's proposal, allowing them to design a cultural facility for the Hudson Yards development.

"It was the height of the recession and the project seemed improbable," said Diller. "As we all know, art is the first to get cut when there is an economic crisis. But with optimism, we started this project with an observation."

"We began the project without a client, but with an ethos and a kind of hunch: an anti-institutional institution that would house all of the arts under one roof, in a building responsive to the everchanging needs of artists, and all media at all scales, indoors and out, into a future that we could not predict," she continued.

The moving shell of The Shed nestles into a skyscraper next door, 15 Hudson Yards, also designed by DSR and Rockwell. The residential tower is part of the towering new commercial and residential area: Hudson Yards.

Both The Shed and 15 Hudson Yards share a service elevator, and The Shed's back-of-house spaces are located on the lower levels of 15 Hudson Yards. The sharing allows the bulk of The Shed's base to be devoted to as much programmable space for art as possible.

Built over the top of a 28-acre (11.3-hectare) active rail yard, Hudson Yards is currently the largest private development in the US.

The Shed's opening rounds out the first phase of the scheme, which also encompasses two sister office towers and another corporate block by development Hudson Yard's masterplanner KPF. Foster + Partners has also created a tall office building here, and SOM has designed a residential skyscraper here that will accommodate the first Equinox Hotel.

Photography is by Iwan Baan courtesy of The Shed, unless stated otherwise.