Situated in the city of Gliwice, Neumann's Villa functions as an office for a water and sewage company.

Originally built in 1926, the building takes its name from Arthur Neumann – a past heir to a prestigious Polish printing company. Over the years is has also served as a university teaching facility, a kindergarten and as the headquarters for the Foundation for Polish-German Cooperation.

Locally based Zalewski Architecture Group is behind the latest renovation. One of the studio's aims was to bring more light into the workspaces within, which led them to collaborate with Fakro.

Fakro's non-standard roof windows were installed in the roof above an attic room, allowing the space to transform into a bright and airy meeting room. Bespoke white frames allow the windows to blend with the building's pale exterior. 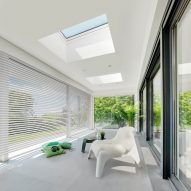 This range of windows was specifically created by the company to suit historic buildings with traditional characteristics.

They also boast ventilation and thermal insulation qualities, keeping rooms at appropriate temperatures throughout different seasons of the year.

"[Our] windows were selected in such a way to keep the attic in the same luminous convention, which determines the character of the whole building," explained Fakro.

To help daylight to reach other parts of the interior, the architects designed a glass staircase connecting the attic room to the ground floor, which plays host to a multimedia room.

Fakro was founded in 1991 by Ryszard Florek, Krystyna Florek and Krzysztof Kronenberger. Its product range also includes skylights that are suited to flat roofs, including ones that can shut automatically when it starts to rain.

Last year, the company also collaborated with different architects to showcase how its windows can be installed in a variety of properties – resulting projects included a thatched house in the Netherlands that features 7.5-metre-high windows stretching up to its roof, and a loft in Moscow that has double-sash skylights.

To find out more about Fakro's non-standard roof windows, visit the website.