Described by Steven Holl Architects as "living and working towers", the development will combine a cylindrical 150-metre-high residential block with a sweeping 200-metre-high office skyscraper, intended to resemble the form of DNA.

"The form of the two towers is inspired by a study of genes and DNA," explained the architecture studio. "iCarbonX's mission – unfolding information – is reflected through the building's design."

Due to begin construction in Autumn of this year, the iCarbonX Headquarters will be fronted by curtain walls with "varying translucencies" to differentiate levels of light as required in each of the buildings.

The residential tower will be punctured by garden bridges, which will wrap around the top and base of the building, before projecting out to the office tower, resembling carbon bonds. Each one will each be lined with a variety of native tropical plants.

iCarbonX headquarters' upper two bridges will form a "health and nutrition circuit", which connects a gym in the residential tower to cafes and a business club in the office block. 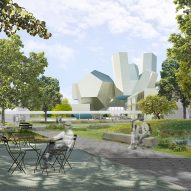 "Architectural meanings are nothing but fictions"

Meanwhile, the two lower bridges will form a link between galleries, meeting spaces, and the iCarbonX clinic.

The lower bridge will extend down to a large public plaza via a grass-lined podium, positioned at the base of the iCarbonX Headquarters.

This plaza will be partially embedded into the ground, and have a cylindrical water feature that will circulate water to "mask the sounds of the city, creating a peaceful, protected space". 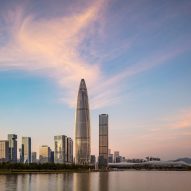 Other recently completed projects by the studio include a proposal to overhaul University College Dublin with a design referencing Giant's Causeway, Glassell School of Art in Houston, and an exhibition and performance centre for Virginia Commonwealth University.