The CIFI Building in Beijing by Steven Holl Architects will have swooping glazed roofs that are designed to contrast with a textured concrete facade.

New York practice Steven Holl Architects is designing the block for Chinese property developer CIFI Group. The 28,000-square-metre building will contain shops on the ground floor with offices above.

Four concave roofs that will curve down over the north side of the building have been designed to comply with local setback codes.

The architects are collaborating with architectural glass specialists Okalux to design the curving glass skylights, which will be supported by a beam structure. Flat sections between the skylights will be used as gardens.

In contrast to the smooth glass, the vertical walls of the building will be made from aluminium-coated concrete, formed in casts made from oriented strand board (OSB) to give it a distinctive texture.

Asymmetric curved and geometric cut-outs in the concrete form of the CIFI Building's facade will be filled with large windows.

Five gardens, each with a reflective pools, will be interspersed between the retail units at street level. These water features will be filled with rainwater recycled from the building's roofs.

Renders show water features carved into the side of the building, funnelling water down to the pools through metal spouts. Large, square stepping stones will create pathways across or around the pools. 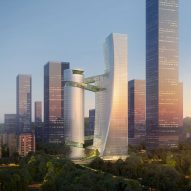 The CIFI building will be located in the Fengtai district of Beijing, in the southwestern part of the city. Construction is due to begin summer of 2019, with the CIFI Building due to complete in spring of 2022.

Steven Holl Architects, which was founded by Steven Holl in 1976, recently released visuals for another project in China, a pair of glass towers that will be linked by garden bridges for biotech company iCarbonX.

Recently completed projects from the practice include a concrete and glass art school in Houston with a sloping roof garden, and a Maggie's Centre for cancer patients in London with a translucent glass facade.