Diners can shop from their table at The Manzoni, a new Milan restaurant by Tom Dixon that doubles as a furniture showroom and the designer's European headquarters.

The opening of The Manzoni follows Tom Dixon's move last year from west London to the Coal Office in King's Cross, where the brand's main offices are situated, along with a restaurant and showroom.

"They had a restaurant at the previous office in London and having moved to King's Cross, there's always been that element of having food and design together," explained Tom Dixon press officer, Jessica Strutt to Dezeen.

"So with the success of Coal Office, now moving into Europe and having our first footprint here, we're doing that similar formula. It was successful so we want to try it in a different location."

The 100-cover restaurant opens fully in early May, following a soft opening during Milan design week, which saw the space host a number of dinners and parties. Once it officially opens, diners will be able to buy everything in the space.

"The idea is that everything is for sale, so table settings, through to candle holders, glassware, furniture, absolutely everything will be available to buy," explained Strutt.

"It's in a hospitality context, so you can experience it and then see it in a live setting rather than just being on the shelf."

The design of the interior was completed by the interior design arm of Tom Dixon, Design Research Studio. Characterised by metallic and marble accents, it allows for "many little alcoves and private spaces".

The restaurant entrance on Via Manzoni, near Milan's famous Teatro all Scala, is dominated by a rough-hewn granite bar that contrasts with the mint green floor tiles.

A series of six wall-hung stainless steel vitrines to one side of the reception area showcase Dixon's tea and coffee pot designs and glass carafes.

A bar area just beyond has mint green and brown tiled walls and floors arranged in a geometric pattern. Fat dining chairs upholstered in pale grey are positioned around black Flash coffee tables in this space and the bar stool version of the seat appears along a raised marble bar that runs the length of the wall.

The main dining space is a long, narrow L-shaped room with a pale curtain made with fabric from Kinnasand's Unix collection hanging the length of one wall. Throughout the space, walls are a moody grey.

Diners sit on the brand's Fat dining chairs upholstered in black boucle fabric, at a set of Cork tables arranged end-to-end in a long line.

"It's very monochromatic, which is what we've focused on with the new collection, and also with an emphasis on materiality. So the walls, the tables, the elements of stainless steel all relate back to that idea," said Strutt.

"And it's all tied in with the concept of good food, and an aesthetic that makes people comfortable."

A string of Dixon's round Opal lamps, which launched during design week this year, hang from the ceiling above the table in a low, looping curve. Stainless steel cabinets punctuate the wall at various points.

Beyond the main dining area is the Jungle room, lit by Dixon's Spring lamps – flattened globes made from twisted strips of shiny brass – and decorated with standing and hanging plants "to contrast with all the concrete".

This space functions at the main display area for the brand's collections, but can be reconfigured to allow for flexible use: "It's a great meeting place for the team, or to have a dinner party or something," said Strutt.

The private office space for Tom Dixon employees is adjacent to the Jungle room.

An outdoor courtyard leads off the Jungle room, with a vast round green Primavera marble table surrounded by silver seats on thick bases. Vertically trained plants grow up the walls. 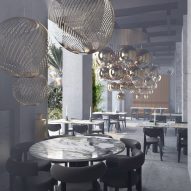 A central granite wash basin matches the main bar, whilst taps and water spouts are finished in polished brass. Floors are marble and black Copper pendant lights by the brand hang above the basin.

As Dixon's first permanent outpost outside the UK, The Manzoni will allow the British designer to show his collections in Milan without having to stage a week-long exhibition in a rented space.

"After years of doing five-day exhibitions in Milan, we finally decided that we had enough of putting such huge energy into pop-up interventions," said Dixon, who is a judge at this year's Dezeen Awards. "We wanted to look at different ways of being present in Milan."