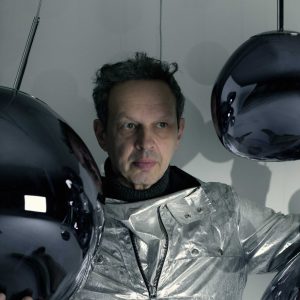 Self-taught designer Tom Dixon began to design furniture after learning to weld without formal training and rose to fame in the 1980s with the S-Chair for Italian brand Cappellini. In 1994, Dixon developed Jack – the iconic light that doubles as a seat – as the result of his new experimentation with welding plastic. The light was put it into production in 1996 through Dixon's own manufacturing company Eurolounge, which he set up after being frustrated by the difficulty of finding UK manufacturers willing to put London-based designers' work into production.

In 1998, Dixon was named head of design at Habitat, where he was creative director until 2008, successfully communicating the brand’s vision of simplistic and modern design. He established his London-based brand in 2002, where he has since produced a prolific portfolio of furniture and lighting products. He has also designed high concept luxury interiors through internal practice Design Research Studio.

Recent collaborations include retro-futuristic suites for Virgin’s first cruise ship, fabrics digitally printed with photos of foil and hair with British textile brand Kirkby Design and an urban farming collection with IKEA to encourage city-dwellers to grow food locally. Dixon previously collaborated with IKEA in 2018 on a collection of "hackable" modular furniture.

Dixon embarked on a 90-day design world tour in 2018, stepping away from Milan Design Week for the first time in 15 years. His work has been exhibited at museums internationally, including being included in the permanent collections of London's V&A and New York's Museum of Modern Art.

Dixon was awarded an OBE for his contributions to British design in 2000.