The two London stores of design retailer Skandium have closed and its e-commerce site has been disabled as the company prepares to go into administration.

The move was announced on Facebook yesterday by former managing director Magnus Englund, who co-founded the brand with Christina Schmidt in 1999.

Forty members of staff are understood to have lost their jobs at the brand, which sold furniture, lighting and homeware from a range of Scandinavian manufacturers.

"Sadly, the majority owners who took over in 2016 put the company into administration today," Englund wrote. "Staff, suppliers and customers deserved better."

"Horrendous shock to all amazing employees," said sales manager Maria White, who had been at the company for 17 years and was among those made redundant. "I believe that each member of staff was made redundant."

"What a sad day," van Elten wrote on Facebook. "You two were there when it mattered, pioneers in a small London world. I'll love and appreciate you forever and always."

The brand's store on Marylebone High Street in central London was locked on the 30 April by agents acting on behalf of the landlord. Its website remains online, although the ability to add products to a cart has been disabled. 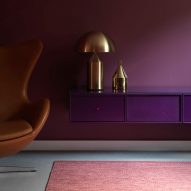 Skandium Townhouse shows how your home could be more eco-friendly

Representing Scandinavian brands including Iittala, Marimekko and Design House Stockholm in the UK, the brand played a role in popularising both vintage and contemporary design from Denmark, Sweden, Finland and Norway.

The duo were forced out of the company in 2016 by investors, although they retained a 48 per cent stake in the business. Seidenfaden remained with the company.

In 2017 Skandium opened a second store, called Skandium Townhouse, in South Kensington. The company previously operated a concession in Selfridges and a Fritz Hansen-branded store in Fitzrovia.

Englund has written a number of books on design including the recent title Isokon and the Bauhaus in Britain, which he wrote with Leyla Daybelge and which was published last month.