Neri&Hu cofounder Lyndon Neri explains how the studio referenced traditional Chinese courtyard homes in its design for a hotel, in this interview Dezeen filmed at the AHEAD Asia awards ceremony.

Tsingpu Yangzhou Retreat won awards in two categories – New Concept of the Year, and Landscaping and Outdoor Spaces – at the third AHEAD Asia awards in March, which celebrated the best in hotel and resort design across the continent.

Located in the Chinese city of Yangzhou, the 20-room hotel comprise a series of old structure that have been renovated and extended. A network of pathways creates a grid that surrounds these buildings and also frames new courtyards.

The hotel is located close to the Slender West Lake in Hanjiang, a popular tourist destination which attracts visitors with its manmade lakes.

"The design brief called for the adaptive reuse of some existing buildings close to a beautiful panoramic lake called the Silver Lake," Neri said.

In order to connect the existing structures, the Shanghai-based studio looked to a housing typology based around courtyards, typical to the Yangzhou area.

"We had to find a way to tie them together so we looked into the Yangzhou traditional courtyard house typology and overlaid this grid on the entire site with walls and pathways," Neri told Dezeen. "By doing this we created courtyards." 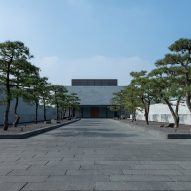 Each courtyard on site corresponds to a different facility within a hotel, including the reception area, the dining area and the guest rooms.

The bricks used to build the walkways were sourced from the surrounding area, and they give the site a muted colour palette.

"Most of the reclaimed bricks were from sites nearby," Neri said. "It gives that patina to the entire project."

Neri praised the client behind the project and his interest in creating architectural landmarks in lesser known rural areas, such as Yangzhou.

"The client was quite a visionary," Neri said. "He argues that there's a lot of potential in places outside major cities. He has acquired remote properties that are historically significant but small."

"Landmarks in China cannot be limited to just the Great Wall, the Summer Palace or the Forbidden City," he added.

"The idea of sustainability is now becoming a paramount issue and I find it very encouraging as a practice that we're actually given more and more of these projects to allow ourselves to experiment and push the boundaries," he said.

Neri&Hu also used reclaimed bricks for a chapel in the city of Suzhou, which combines a textured brick base with a white box made from perforated metal.

This movie was produced by Dezeen for AHEAD. It was filmed at Andaz Singapore. Images are courtesy of Tsingpu Yangzhou Retreat.