Chinese studio Neri&Hu has completed a boutique hotel in Yangzhou comprising a grid of dark-brick walls that surround a series of courtyards, gardens, guest rooms and service areas.

Tsingpu Yangzhou Retreat is located close to the Slender West Lake scenic resort in the Hanjiang District to the north of the city's historic centre.

The area is popular among tourists visiting its manmade lakes. The Shanghai-based studio led by Rossana Hu and Lyndon Neri was tasked with creating a 20-room hotel on a site dotted with small lakes and existing structures.

The architects were asked to repurpose some of the old buildings and integrate new elements to create a proposal that provides the required spaces.

Neri&Hu introduced a grid of brick walls and pathways that tie the old and new spaces together, and transform the site a cluster of interconnected rooms and courtyards.

"The inspiration for the design originates with the courtyard house typology of vernacular Chinese architecture," said the studio, which has also converted a former missile factory in Beijing into a car repair garage and offices.

"As with the traditional courtyard, the courtyard here gives hierarchy to the spaces, frames views of the sky and earth, encapsulates landscape into architecture, and creates an overlap between interior and exterior."

The walls are constructed entirely from reclaimed brick and form narrow passages that crisscross the site.

Openings in the walls and roofs of the corridors allow natural light to enter these spaces, which create an elongated sense of perspective due to their narrow width.

The brick walls feature various bonds that are perforated in some places, and in others create embossed surfaces that accentuate the different effects of light throughout the day.

Several of the areas contained within the grid are occupied by guest rooms and shared amenities including the reception, library and restaurant.

Small gaps separate the rooms from the walled passageways, enhancing the sense of privacy and providing guests with their own landscaped outdoor spaces.

The other courtyard areas are left open to the sky and contain public area including a water garden, bamboo garden, tea garden and flower garden.

Many of the buildings' roofs are hidden below the height of the brick walls, which enhances the sense of privacy and enclosure when the retreat is viewed from outside.

The largest structure is a two-storey guesthouse arranged around a secluded central courtyard. Its white exterior contrasts with the dark brick of the gridded walls.

In various places, steps ascend from the passageways through openings in the roofs to allow guests to look out across the complex.

A reception space is housed in a structure lined with slatted timber screens that frame views of an adjacent reflecting pond.

A derelict warehouse building with a gabled profile was extended with a concrete addition to create space inside for a restaurant, theatre and exhibition area.

The consistent use of brick to create the walls and courtyards results in a unified project that combines references to traditional construction with a contemporary architectural approach.

The studio employed a similar material palette at a chapel for a hotel complex near Suzhou, which features a brick base and a main hall contained in a glowing white cube. 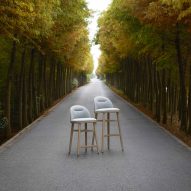