The co-working company has taken over three floors of the skyscraper, which was completed in 2018 by Pelli Clarke Pelli Architects for cloud computing company Salesforce.

WeWork's headquarters occupy the 36th and 38th floor, while the 37th floor in between hosts a mix of employees and members of WeWork. A staircase runs up an atrium to connect the three levels.

The interior design was completed by an in-house team led by WeWork chief creative officer Adam Kimmel, which also recently designed Thrive Globals' headquarters in New York City. Following on from this project, the San Francisco headquarters are intended to be colourful and relaxed.

The Salesforce Tower has a curved glazed exterior, bringing ample natural light into the headquarters. Floors are mainly left open-plan to be better suited for collaborating and socialising, with some areas segmented by glazed partitions.

One of the office areas features two teal sofas and two blue armchairs by American designer Milo Baughman. Additional furnishings in the area include a pair of wood Spanish Chairs by Danish modernist Børge Mogensen and a large coffee table.

In the conference room, two tables are accompanied by Marcel Breuer's steel-framed Cesca chairs. The backs and seats are upholstered in orange, red, pink and yellow to offer a pop of colour.

Another lounge is arranged in front of the rounded glass facade with four yellow upholstered seats on top of a geometric white-and-black rug. A set of small dining tables and bentwood chairs with deep rounded backs follow the curve of the wall, creating a cafe-like atmosphere.

Vibrant rugs are a focal point of the interior design accompany the colourful pops of furniture, including designs by Hay, Fogia and Vitra. Most of the lighting lighting is by Artemide. 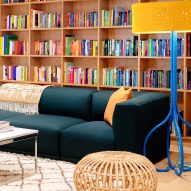 In one area, a vintage, technicolour Beni Ourain rug is teamed with a custom acrylic coffee table and a golden Maharam mohair chair designed by American modernist Vladimir Kagan.

WeWork Salesforce is complete with potted plants and flowers, and colourful pieces of art. Much of the flooring is covered in pale wood, with feature walls in concrete offering an industrial touch.

WeWork was founded by Adam Neumann and Miguel McKelvey in New York City in 2010. San Francisco marks its fourth headquarters, joining outposts in London and Shanghai.

Earlier this year, the company transitioned into wider parent brand The We Company. Under this umbrella, it is developing a range of initiatives to join its workspaces, including WeGrow schools, WeWork, WeLive for co-living and the Rise by We gym.

The We Company is also bolstering its in-house design team, with recent additions including architects Bjarke Ingels and Michel Rojkind, and designer Dror Benshetrit.

Photography is by Jason Schmidt and Alexei Hay.