Co-working company WeWork has announced Danish architect and BIG founder Bjarke Ingels will join the company in the role of chief architect.

WeWork co-founder and CEO, Adam Neumann, made the announcement about the newly created position in a blogpost today, 8 May 2018.

He explained that Ingels has been brought on board to advise of the design of the company's expanding offering of workplaces and other community-focussed ventures, as it continues to grow rapidly in the US and beyond.

"As WeWork's chief architect, Bjarke Ingels will help us reimagine and reshape the future of our spaces, our company, and ultimately our cities," said Neumann.

"Bjarke caught my attention because he's changing the way we think about architecture. His designs inspire as much as they surprise."

Ingels to remain in charge of BIG

Ingels will continue to head up his firm BIG, which was founded in 2005, and has offices in New York, Copenhagen and London.

His team's first task will be to transform the historic building formerly occupied by department store Lords and Taylor, on Manhattan's Fifth Avenue, into a WeWork flagship.

BIG already has a relationship with WeWork, and unveiled its design for a WeWork kindergarten, WeGrow, in November 2017.

"Bjarke and BIG have also been instrumental in designing WeGrow," said Neumann. "Given their experience with projects like the Lego House, we will reimagine education and the learning environment for children to foster entrepreneurship and creativity."

The company secured a $4.4 billion investment from Japanese conglomerate SoftBank in August 2017, with plans to grow its current markets and expand its subsidiaries in China, Japan and the Pacific region.

WeWork's success has ballooned since it was founded in New York in 2010, when it opened its first co-working space in Soho – sparking a trend for similar options worldwide. The company now operates shared workspaces and office buildings in 21 countries.

"WeWork was founded at the exact same time as when I arrived in New York," said Ingels. "In that short amount of time – the blink of an eye at the time scale of architecture – they have accomplished incredible things and they are committed to continuing their trajectory to places we can only imagine." 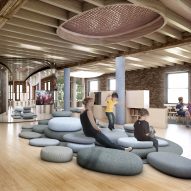 Neumann added: "When we started WeWork eight years ago, we knew the world didn't need another office building, it needed spaces where people could collaborate on projects, connect and create together, and potentially change the world."

BIG is known for buildings including the pyramidal VIA 57 West housing in New York, the Danish National Maritime Museum in Helsingør and the 8 House residential development in Copenhagen. It is currently working with Heatherwick Studio on Google's new California campus, as well as several skyscrapers for Manhattan.

"The designs of Bjarke Ingels are world-famous as much for their creativity as their practicality," Neumann said, pointing out the Amager Bakke waste-to-energy power plant with a ski slope on its roof in Copenhagen, and the BIG U flood defence proposals for Lower Manhattan, as examples. "Take a look at any of his projects and you will see his thought-provoking and original designs."

For job opportunities at WeWork, visit their company profile on Dezeen Jobs.

Portrait of Adam Neumann and Bjarke Ingels is by Alexei Hay.