Interior design studio Drake/Anderson has used muted tones, earthy materials and clean lines to create tranquil rooms with a strong connection to nature inside this 12-year-old home in the Hudson River Valley.

The Columbia County residence is situated on a verdant property in the Hudson River Valley. Built in 2007, the home was designed by Michael Bell, a Columbia University professor and founder of the studio Bell Seong Architecture and Visibleweather. Bell dubbed the project the Binocular House.

Sitting atop a concrete plinth, the single-storey, U-shaped home features glass walls and a fluid interior. The dwelling is reminiscent of Mies van der Rohe's Farnsworth House in Illinois and Philip Johnson's Glass House in Connecticut.

The new owners purchased the dwelling in 2016 and enlisted New York-based Drake/Anderson – led by Jamie Drake and Caleb Anderson – to revamp the interior. The designers took cues from the natural scenery, including a verdant lawn and dense forest.

"Jamie and Caleb's goal for the interior design was to embrace the textures and palette of the exterior surroundings in the colours and furnishings," the studio said in a project description.

In the living room, the designers employed clean lines and shades of grey, ivory and brown to create an uncluttered atmosphere. A silvery rug from Tibetano with a raised, Tetris-like pattern adds texture to the restrained space.

The living room, like other spaces, is furnished with a mix of contemporary and mid-century-inspired pieces. A custom sofa faces a metal-leg coffee table by Peter Lane. Throw pillows are wrapped in fabrics by Holland & Sherry, Sandra Johnson and Lauren Hwang.

Two vanilla-hued lounge chairs from KGBL are positioned around a cubic, wooden table by Mizuki Furniture. Sitting atop the side table is an orb-shaped Axon lighting fixture by New York studio Apparatus – one of several sculptural pieces that act as a counterpoint to the straight lines that dominate the room.

The living room also features a storage credenza by BDDW and a leather-wrapped daybed by Brooklyn-based Vonnegut Kraft. Crescent-shaped arms hold a tubular pillow in place, giving the chaise lounge a distinctive profile. 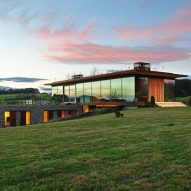 A similar aesthetic was employed in the home's private areas. The master bedroom features a king bed and an upholstered bench by Milan-based Dimore Studio. Tall table lamps rest atop wooden nightstands by New Day Woodwork.

A vast, white area rug from ALT for Living helps soften the room's austere look. Floor-to-ceiling glass provides engrossing views of the lush landscape and brings the outdoors in.

The guest bedroom is furnished with a daybed designed by Drake Anderson and fabricated by New Day Woodwork, along with a rounded side table by Samuel Amoia and a dark-toned armoire by Mizuki Furniture. Similar to other rooms, a large rug was used to add texture and warmth.

The team also freshened up the kitchen, which features a grey marble island and wooden cabinetry. A round dining table by Dimore Studio is encircled by Patrick Naggar-designed chairs with wooden legs that evoke tree branches. A rectilinear light fixture by Pelle is suspended overhead.

In an office, the interior designers added a streamlined desk with exuberant chairs. A collection of rounded vessels add functionality and visual interest.

The interior revamp marks the first phase of a larger undertaking. The clients have purchased neighbouring properties and intend to create an estate with a winery. Landscape architecture firm James Corner Field Operations has been hired to design the grounds. Already, a cellular sculpture by Dewitt Godrey has been added to the property.

Known for its rolling hills and greenery, New York's Hudson Valley offers a scenic backdrop for contemporary homes. Other recent projects in the region include black cottages by Thomas Phifer and Partners, a glass and stone dwelling by Slade Architecture, and the revamp of a mid-century house by GRT Architects.