Dezeen's editorial director Amy Frearson spoke to members of the family behind the Italian furniture brand Minotti about their approach to combining heritage with a vision for the future in this talk filmed by Dezeen.

The talk took place at Minotti's London showroom and featured Alessandro and Susanna Minotti, the grandchildren of brand founder Alberto Minotti, who handed over the company to his sons Renato Minotti and Roberto Minotti when he passed away in 1991.

The panel was joined by French designer Christophe Delcourt.

The talk traced the origins of the brand, which was established in 1948 as a small-scale artisan workshop and grew to become a major furniture brand. It also looked at its plan for the future, in an exploration of how a heritage brand can stay relevant in a global and digital age.

The brand developed its reputation based on a modern style favouring clean lines and rectilinear shapes, but has recently been experimenting with new forms.

Its 2019 collection, launched at the Salone del Mobile in Milan last month, features pieces by designers including Rodolfo Dordoni, Nendo, GamFratesi and Studio MK27, as well as Delcourt.

This talk coincided with the arrival of the collection at the London showroom, which is the first retailer to stock the pieces.

Alessandro Minotti joined Minotti in 2003 and is now general manager, running the company's worldwide sales department, while Susanna became the head of interior decoration in 2018 and is responsible for the design of its flagship stores and retail displays worldwide. 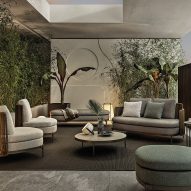 French furniture designer Delcourt began his collaboration with Minotti in 2017 and has since designed seating systems, tables and storage solutions for the brand.

Dezeen has hosted and streamed panel discussions with designers all around the world, with recent examples including a talk at the Design Museum that explored the differences between Bauhaus and Danish design and a lecture by Neri&Hu at Stockholm Furniture and Light Fair 2019.