Skeletal stools and a blobby, monolithic table and chair features in this series of furniture by French designer Elissa Lacoste.

Lacoste drew on natural landscapes and human forms to create the new works, which include the Dolomies coffee table and chair set, and the Soft Beings stools.

"I like morphing the mineral, the vegetal with the animal to give a grotesque aesthetic to my objects," Lacoste told Dezeen.

Each comprises a metal base covered in a mixture of silicone and stone powders that Lacoste has sculpted in various shapes.

"The shaping of the surface is a subtle and delicate modelling gesture that is a sensual caress of the materials," said Lacoste.

"It is by working the material in the manner of a classical sculptor that I decide on a shape by discovering and uncovering it as I make it."

For the monolithic Dolomies duo, the silicone is finished with a clay powder to create ridges, bumps and swirls.  The final result resembles igneous rock, a formation of hardened lava.

"Dolomies are mainly informed by nature, bringing to the domestic inside shapes that are encountered in the natural outside," Lacoste told Dezeen. "They manifest as material singularities to recall the space of a cave or geological concretions from a wild landscape that has escaped from human impact."

A series of stone powders are added to pigment the silicone of the Soft Beings stools, meanwhile, to create a finish that could be likened to skin or scales. Underneath, the delicate skeleton is made from found pieces of steel that are welded together. 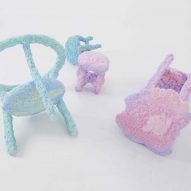 "I wanted the objects to inhabit the space by bringing a sense of motion and liveness through their shapes," the designer added.

"The sculptural aspect sometimes masks their functionality to favour an untamed design and a formlessness allowing the viewer to have their own illusory depiction," she continued.

Lacoste's Dolomies and Soft Beings is set to go on show later this year at the Aybar Gallery in South Beach, Miami, Florida. The gallery, which previously occupied a private apartment, is currently on the hunt for a new space in the city.

Photography is by Elissa Lacoste, unless stated otherwise.