Ilse Crawford and Oscar Peña have stepped down from Design Academy Eindhoven after more than 20 years.

Crawford and Peña will both leave DAE at the end of the current term, the Dutch design school announced today.

The husband and wife are both long-standing heads of bachelor programmes. Crawford has been head of the Man and Well-Being course for 21 years, while Peña has led the Man of Activity programme for 23 years.

"It has been a privilege"

"It has been a privilege to explore together what it means to be better humans and design for that," said Crawford. "The inter-connection, interdependency and cooperation always were both a challenge and a feast."

Meanwhile Peña said that it had been a "great journey" to act as a mentor to aspiring young creatives.

"To stimulate, inspire and challenge them to become active participants in creating a better world for all of us. I will miss that," he said.

Crawford and Peña's departure comes two years after Joseph Grima was appointed creative director of DAE, which is recognised as one of the most progressive design schools in the world. 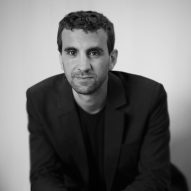 Grima has paid tribute to the pair and the contribution they have made to the school.

"Both of them have given so much of their vision and energy to DAE and shaped it to what it is today," he said. "Ilse and Oscar built up an incredible practice, both in and outside the academy, which is a remarkable achievement."

"Farewell festivity" for the pair

Hope, an exhibition co-curated by Crawford and Peña, marks the end of the pair's tenure. The show, which explores the potential for design to act as a catalyst for change, is on view at Kazerne in Eindhoven until later this summer.

DAE said that the exhibition "holds an optimistic message for the future from the departing heads, that small changes can make big differences".

The school also plans to hold "a farewell festivity" for Crawford and Peña to celebrate their contributions.

As well as her position at DAE, Crawford has led London-based design practice Studioilse since 2001. Her design and interiors projects include the Food Bar at the Grand Hotel in Stockholm, the stippled Zanat Touch furniture and a series of cork pieces for IKEA.

Peña is co-principal of Studioilse, having joined his wife after leaving a position as global creative director and product designer for Philips Lighting in 2015.

DAE said it is already looking for replacements and hopes to announce more details soon.