Béhar, founder of design studio Fuseproject, developed the project with New Story, a non-profit dedicated to finding solutions to homelessness, along with homebuilding technology company ICON.

The trio teamed up last year to use 3D printing to quickly build an affordable, high-quality housing for families living on less than $200 (£154) a month. The team is now rolling out this same technology to form "the world's first 3D-printed community" for a small population of farmers and palm weavers.

The project will be in Latin America, although the exact location remains undisclosed.

"We are thrilled to partner with New Story on their mission to end global homelessness," said Béhar. "I believe the most advanced technologies can deliver designed solutions for those most in need, and it is both the new technology from ICON and the vision of New Story that is making it possible today."

First houses to be printed this year

Fuseproject's environments team has designed a suite of 3D-printed residences for multi-generational groups, with the first houses slated to be printed later this year.

The team worked closely with future residents to decide on land selection and community planning. The 3D-printed model initially developed last year has also been modified to create a version that can be adapted to various needs.

"As we spoke to the community members, we realised that a single house design doesn't respond to the needs and expectations," said Béhar. "This led us to design a system that allows for different programmes, climate factors, and growth for families and spaces."

Each residence will occupy a 120-square-metre lot with the interiors of each amassing 55 square metres. This arrangement will allow families access to a covered outdoor kitchen and dining room, and gardens for keeping chickens.

The concrete walls will be left exposed inside and out, and will be decorated with a striated pattern as a result of the 3D printing. Residents can also chose different colour tints for the concrete.

The team has designed the houses to feature a large a curved roof that extends at the front and the back to act as a buffer against heavy rainfall. The bases of the structures will also be enhanced and wall construction will be reinforced in order to bolster the houses against seismic activity.

Perforated concrete blocks will run along the top of the walls to create a clerestory for natural ventilation. Inside, the arrangements will predominantly be open-plan to further encourage air flow.

Inside, the curved walls will make for cleaning easy and reduce the development of mould.

All interior elements from the kitchen and bathroom, seating and wall ledges in the walls to structural hooks for building closets and storage will also be 3D-printed. 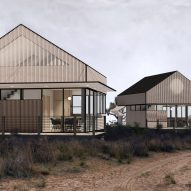 Construction of the community is slated to start in summer this year and is expected to be speedy.

Walls and construction elements will be produced by a large portable 3D-printer, designed to produce nearly no waste and function under difficult circumstances, such as limited water, power, and labor infrastructure.

Béhar and New Story believe the scheme could provide a model for producing high-quality housing for the poorest communities, as part of a larger bid to reduce global homelessness.

"Challenging our assumptions, iterating based on data, and taking calculated risks on innovative ideas will allow us to reach more families with the best possible solutions, exponentially faster," he continued.

"This project presents a number of exciting questions," Béhar added.

The San Francisco-based designer, who founded Fuseproject in 1999, also launched a range of prefabricated accessory dwelling units last year, with the aim to tackle rising house costs and increase urban density in California.

Other work by Fuseproject include a robotic furniture collection with MIT Media Lab, a wearable UV sensor and robot ElliQ, all of which were among the shortlisted designs for Dezeen Awards last year.