A handmade copper lamp and a tiger-shaped pom-pom rug are among the designs featured in this all-female exhibition, which Chelsea gallery 1stdibs is hosting for this year's NYCxDesign festival.

Deeper than Text is an exhibit organised by the Female Design Council in New York City, an organisation founded by local designer Lora Appleton that provides career support, guidance, and mentorship to women in design.

The installation showcases work from 19 international female designers, from places including Lebanon, Denmark, South Africa, the Netherlands, Germany and the US.

"It's all about women supporting women," said Lora Appleton at the installation's press opening on 9 May 2019.

"It has been a privilege and an honour to be trusted by these women, to show their work, to install their work, and to be able to engage it in this incredible space at 1stdibs," she said.

Works on display include a copper table lamp by Karen Chekerdjian, a bronze sculpture by Justine Mahoney, and colourful ceramics by Zizipho Poswa.

A cluster of three chainmail light fixtures that hang in the centre of the space were created by mother-daughter design studio Konekt in Philadelphia.

A colourful knotted wool and silk tapestry by New York artist Malene Barnett defines one wall and is flanked by sconces by Amanda Richards. In front is a bright blue velvet chair by Leah Ring of Another Human studio. 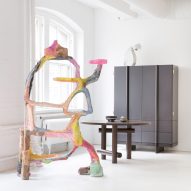 Pieces from Michele Quan and Alexandra Rowley round out the exhibition.

Deeper than Text is organised by the Female Design Council, which Appleton founded after Hillary Clinton lost the 2016 election. The council seeks to connect female designs, as well as foster dialogue and spark action on difficult issues facing women in a predominantly male industry.

"The Female Design Council was an idea; it was something that I wanted to really put my energy into after the election [of Donald Trump] two-and-a-half years ago," she said.

In addition to a hub in New York City, the organisation recently launched in Los Angeles.

"The Female Design Council, while it was founded by me, has really been built from the female community in New York and beyond," Appleton said. "It connects community, connects all of the different layers of how we do design, and has the opportunity to bring together incredible master designers who just happen to be women, from all over the world."

In 2017, Egg Collective launched Designing Women to "support equality and empowerment of women worldwide". It formed part of a surge of all-women design shows that thrived during NYCxDesign that year.

This year, Egg Collective's wood dining table design is displayed at Appleton's exhibit, made with white oak and bleached maple.

It is among a number of installations at NYCxDesign festival, which runs from 10 May to 22 May 2019. Others include a showcase of outdoor furniture and an immersive installation at A/D/O.

Photography is by Pernille Loof.